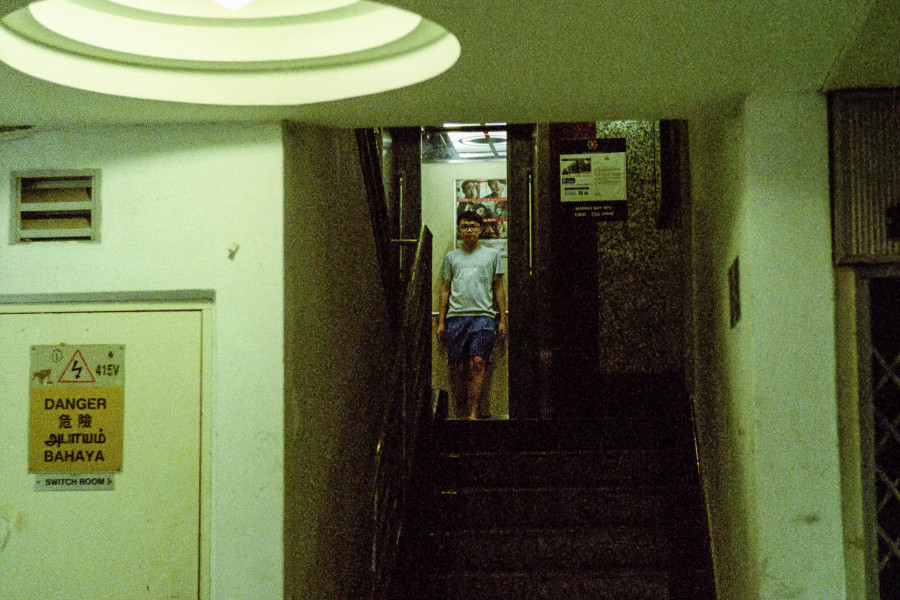 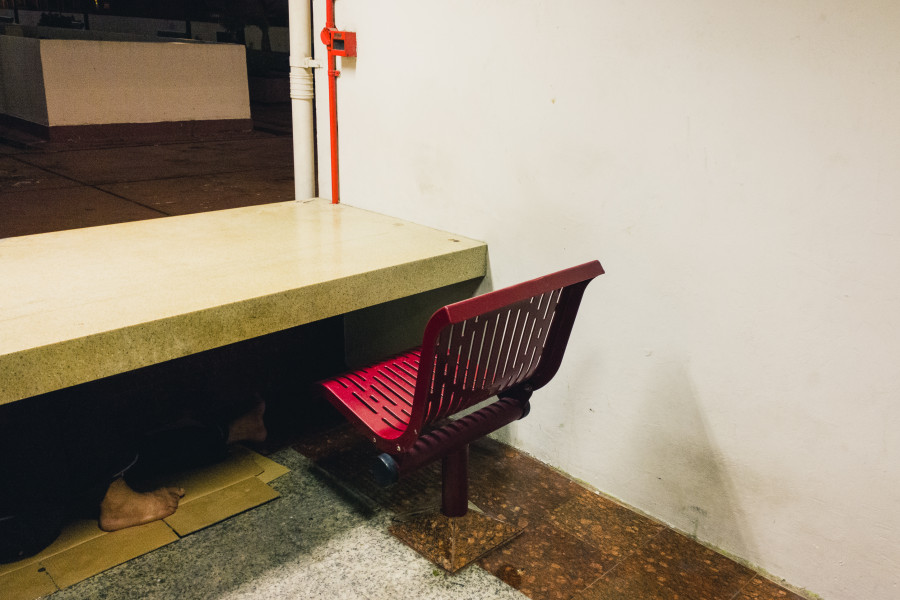 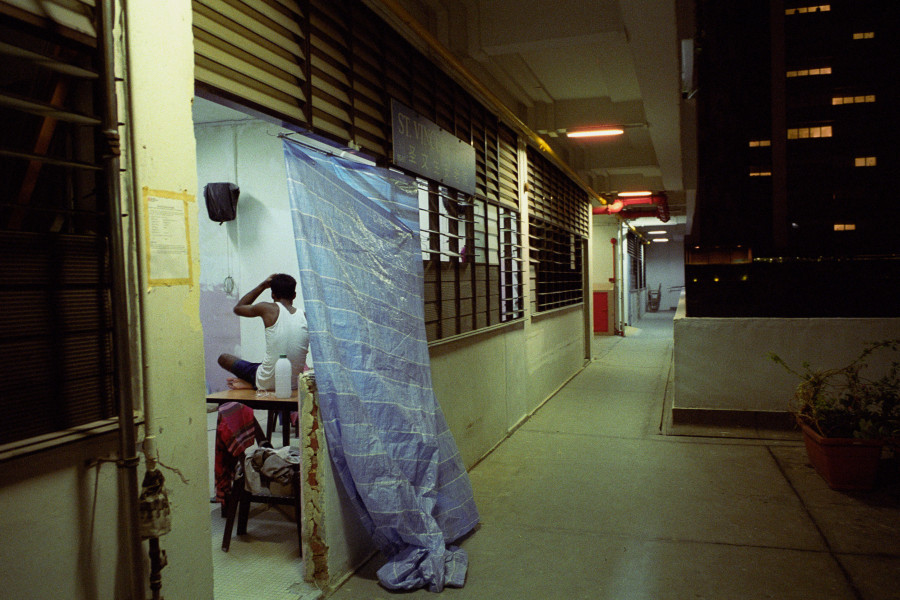 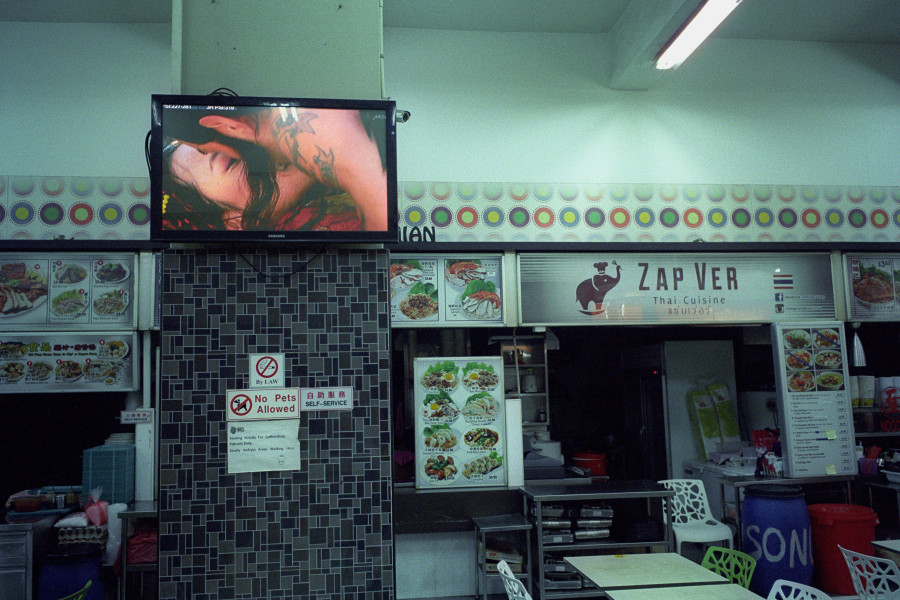 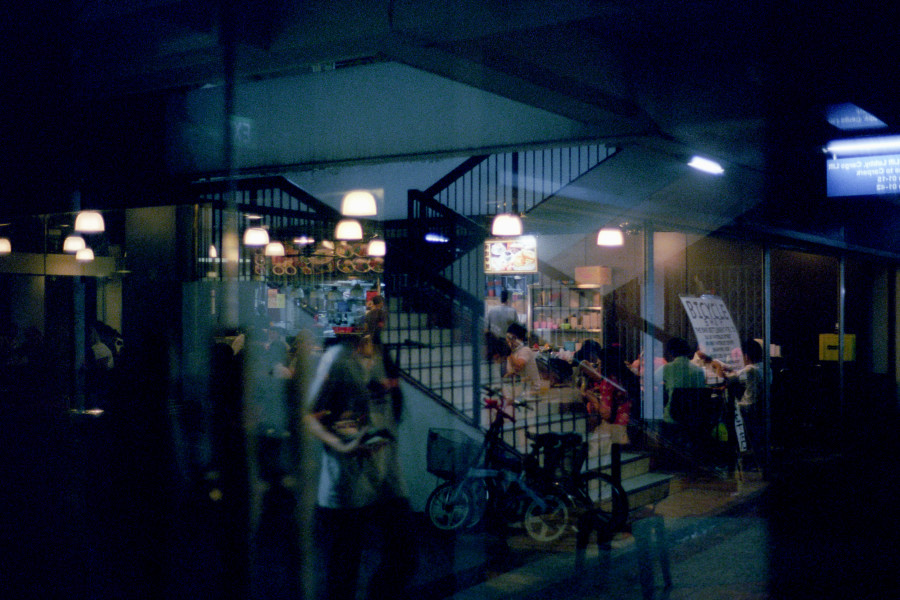 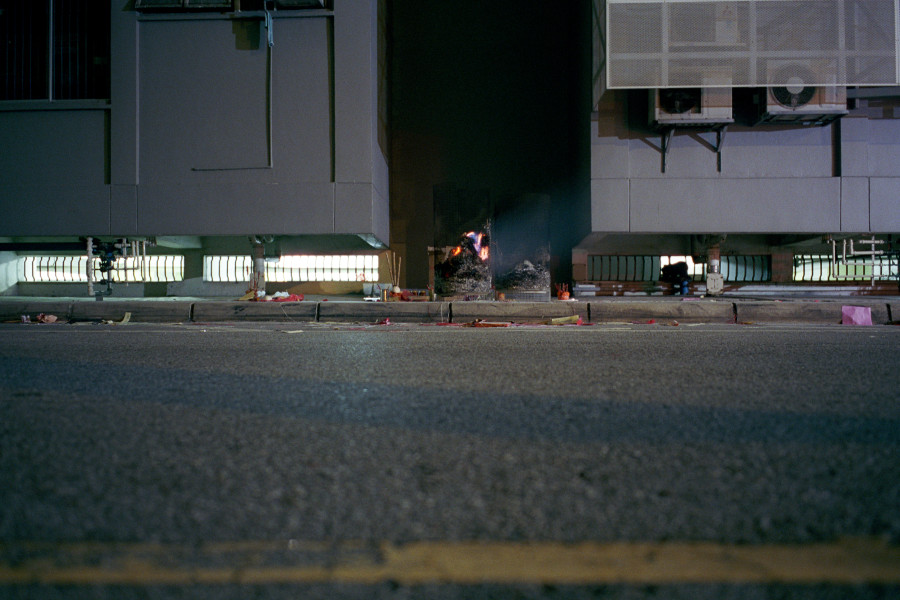 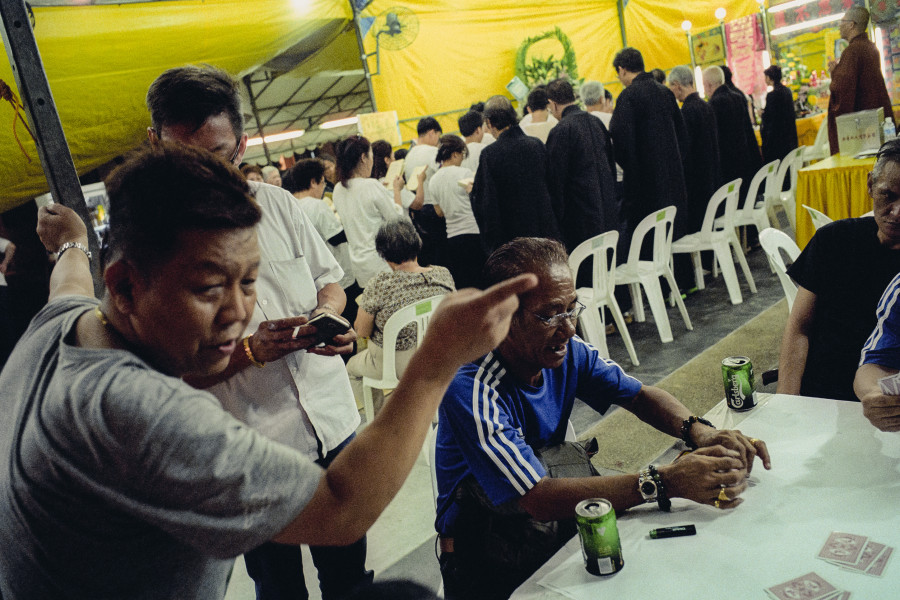 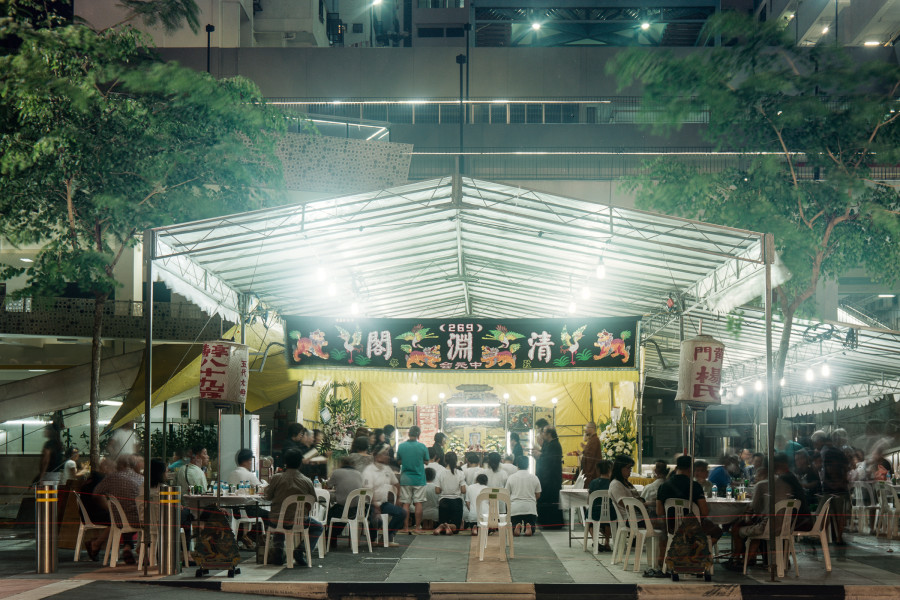 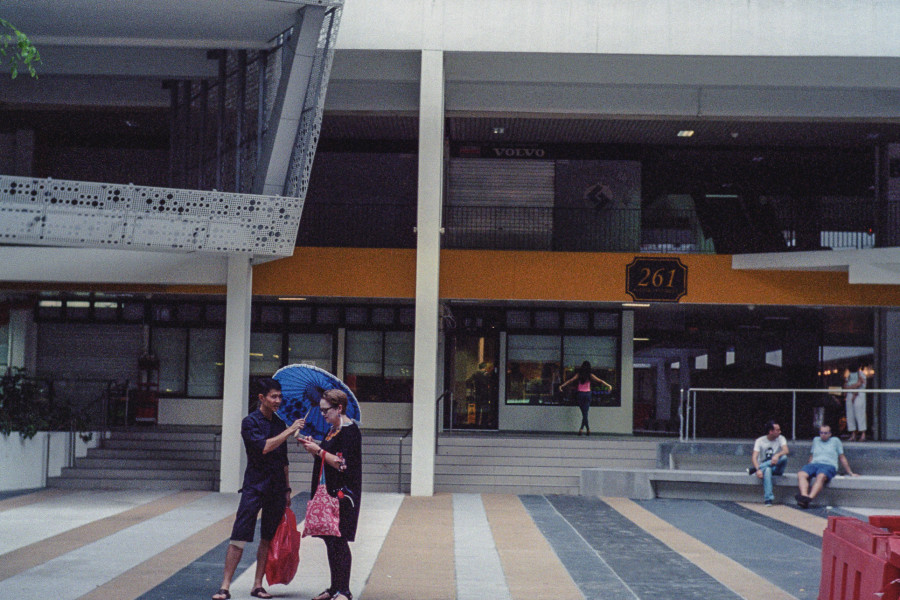 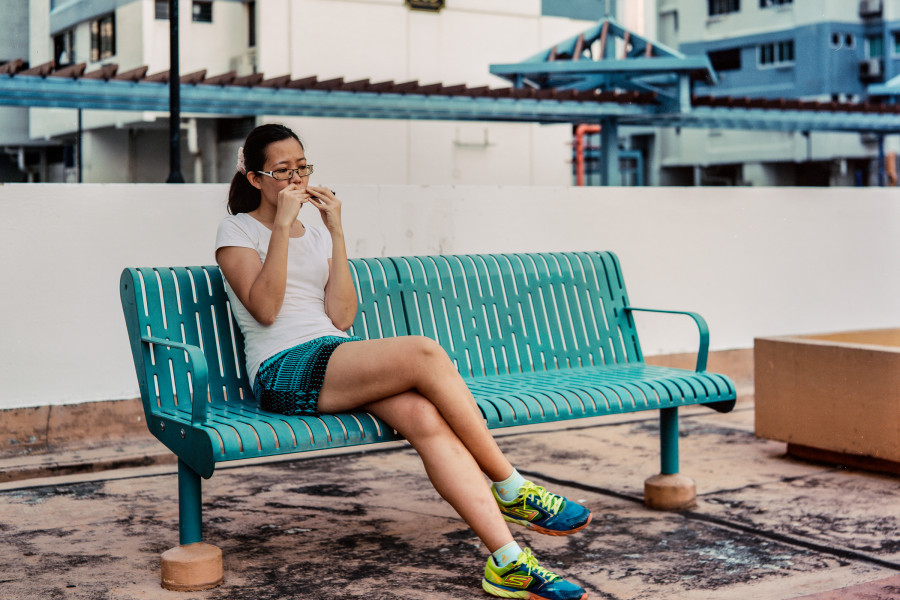 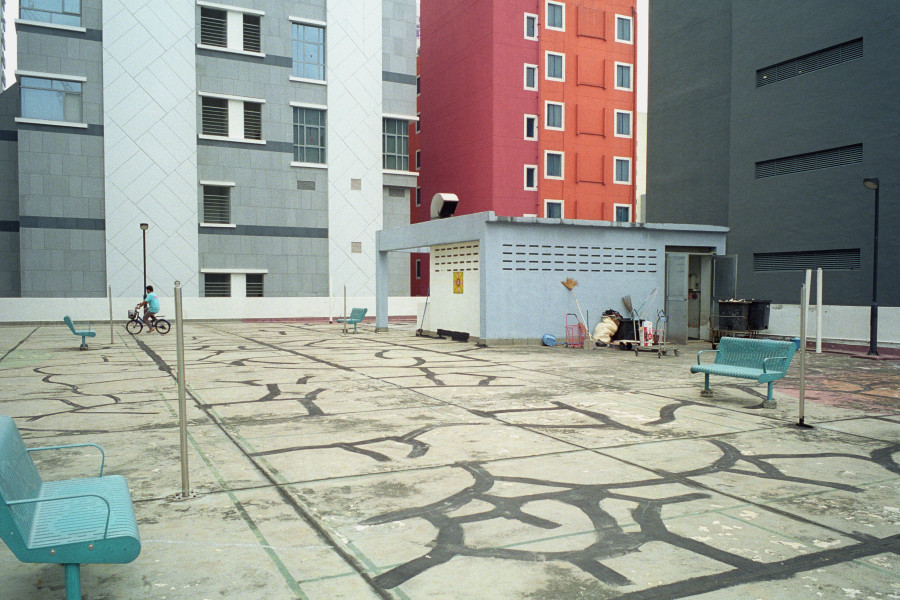 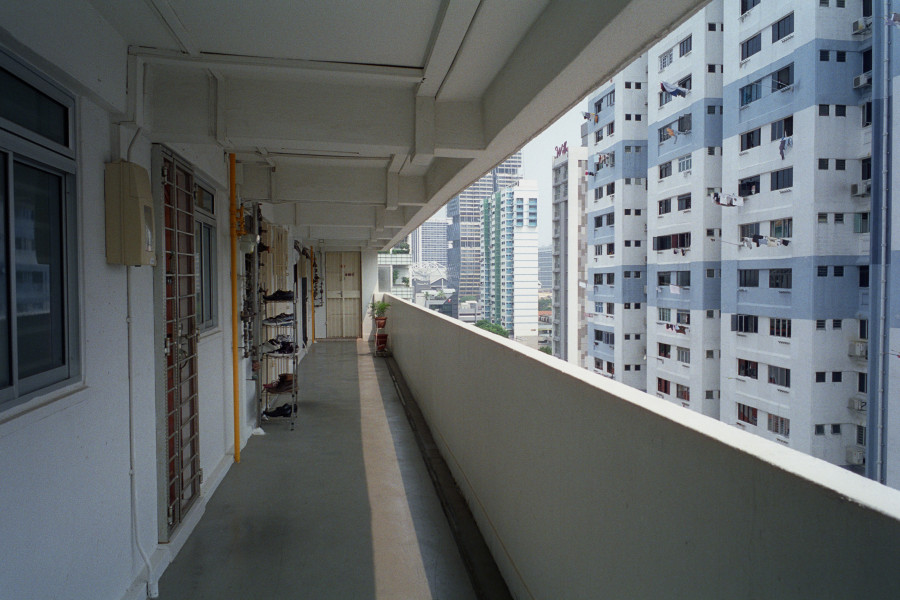 In the heart of the city, an apartment complex stands tall. Calm above the street, nebulous connections trace paths through the space.

“No chicken rice today, only pork rice.” The hawker grins at me. Sold out again. Not surprising. This chicken rice stall is famous.  The pork is good too.

On the fifth floor void deck a solitary figure strolls about, two small dogs chasing each other at his heels.  A man several floors above spots me gazing up and nods at me with a grin.

Along the corridor we get asked if have we just moved in. People know an unfamiliar face. “It’s like an oasis here, separated from the street.” a resident tells me. “We like it like that.”

At the funeral held in the art space, Roy, who works the chicken rice stall comes up to me. “Many photos tonight?” he asks. “A few” I reply. He gestures with a nod at the gathering around us. “My relatives.” He states.

Public housing is one of Singapore’s success stories, and often held up as a shining example of how the city-state has modernised and provided for its citizens in the 50 years since independence. Regularly quoted statistics show that over 80% of Singapore’s residents live in HDB (Housing Development Board) Public Housing and 90% of these are home owners.

In the words of the official narrative and as stated in the National Heritage Board publication Who’s your neighbour?, the HBD block is “a high-rise village of people of different origins, traditions and mother tongues who have learned to live together in harmony.”[2]

Unlike the vernacular spaces of other cities, Singapore’s high density urban environment exhibits a high degree of planning and this includes spaces specifically designed to foster community engagement and interaction. Common corridors, void decks, local amenities and open, mixed use spaces are all carefully integrated into urban planning design.

Though generally regarded as a highly successful program, Singapore’s public housing has to a certain degree been thrust upon the population. The well-documented shift from overcrowded shophouse ghettos and kampung villages to towering HDB blocks did not happen entirely without resistance. Perhaps recognising the effects of this displacement in part gave rise to the invention of the ‘Kampung Spirit’ narrative that emerged as part of the government campaigns promoting HDB living.

While understandably and deservedly proud of HDB public housing, I cannot help but wonder what these spaces would become were they allowed to grow organically.

Aspects of the unplanned, the personal and the private all infringe upon public spaces and their designated use. The open space for meeting your neighbour becomes instead one where privacy is sought. The common corridor becomes divided as ownership of the space in a radius outside one’s front door is individually claimed.

In the density of urban living, a peculiar aspect of which is the closed private space of the individual home – just one unit among many, all superficially the same – an inevitable tension between the public and the private arises with the potential to disrupt the carefully constructed conditions for community ideals.

Here, in the eventual ruins of progress an archaeology of the future will unearth, an acceptance of the terms of social housing for the sake of pragmatism is coupled with a fiercely guarded privacy that defies the coercive Kampung Spirit narrative perpetuated in government literature.

The non-space of the void deck – it’s very name conjuring up the dichotomy of an empty space both welcoming and hostile – is but temporarily occupied. Many residents of Waterloo Centre bypass the fifth floor void deck and the commercial spaces below on their way to and from their homes on the floors above. A ‘buffer’ against the outside world was how one resident described it to me.

Yet the outside world is closing in. The city continues to grow. “I used to be able to see the sea” said another resident, talking about a time long past. Now the surrounding buildings offer up a view of concrete, steel and glass.

On the ground floor, the most bustling of the public spaces in the Waterloo Centre, a territorialisation of public spaces for private use takes place producing an ever-shifting ownership within, and sometimes clashing against, the boundaries of public authority and the desires of other occupants. On the floors above, the void deck, in lifts and along common corridors, brief encounters form networks while the designated public space remains frequently empty, a temporal void, rarely filled, mostly waiting.

“The social significance of public space has to be understood and given the necessary emphasis if their roles as settings and catalysts for social interaction are to be maximised. The patterns of use of the public places in HDB estates illustrate that different places accommodate the various routines of residents. These spaces, therefore, assume varying social significance for the residents, depending on the latter’s lifestyles and routines.”[4]

A funeral turns private grief into public spectacle. A community appears, gathers, mourns and then disappears. The place becomes once again a non-place, “the palimpsest on which the scrambled game of identity and relations is ceaselessly rewritten”.[5]

In Waterloo Centre, an urban oasis, the dynamics of the public-private continuum give rise to what may be an example of Foucault’s heterotopia[6]; a space that contains the potential for the affirmation of difference and multiple uses.

Interestingly, it is in the possibilities of the public space so essential to the planning success of the HDB public housing program that the organic emergence of a community, a liberty and the expression of a community spirit may happen, perhaps despite rather than because of the implementation of any particular policy.

[1] The title references Vincent Descombes’ “rhetorical country”. This is a place in which a person feels at home due to the fact they are able to be understood and to understand others based upon a shared rhetoric; a cultural commonality.

[2] “Who’s Your Neighbour?” – a guide published in 2014 by the National Heritage Board in collaboration with the National Integration Council and The Housing Development Board opens with this description of a HDB community. accessed 02/11/2015

[6] See Michel Foucault “Of Other Spaces: Utopias and Heterotopias” published by the French journal Architecture /Mouvement/ Continuité in October, 1984, under the title of “Des Espace Autres”. Translated from the French by Jay Miskowiec. http://web.mit.edu/allanmc/www/foucault1.pdf accessed 02/11/2015

Whose authority is it to mark the spaces in which we live? Don’t we as residents of a place know what we want?   Do we have a baseline on privacy that we don’t want others to cross? What if these spaces flip-flop between private and public?

What is this kampong spirit? Is there just one version of it? Is it good neighborly behavior that gives a warm, fuzzy feeling that someone cares?   Is it relational harmony or safety or happening-ness or something else? Or if none of the above, do we just want our privacy?

Given so many personal takes, is it even possible that any one authority can define how best to live together … and broad brush it into all housing planning? Or should it be an iterative process to in include the residents’ take on communal living ? That could be happening. The new HDB’s void decks are said to be pass-thru corridors on the way to the elevator, not a casual gathering place for residents.   Is this new design the correct understanding?

I love the discussion Tom and I had on one of his Waterloo Center photographs, of laundry on poles projecting from a residential unit’s window. Such a common sight that we hardly notice. But the spats we could have over dripping laundry from upstairs.   We can all agree that the air outside our window is definitely public space but when my laundry-loaded pole goes out, that trajectory and occupation of space is private. When my laundry is dry and retrieved, that space out there reverts to public again.

Many of Tom’s photographs visualize this blurring of public and private spaces in scenes so common we don’t even see them or mind. Yet, everyone negotiates this spatial occupation, which his Rhetorical Territories series suggest HDB residents have educated themselves to instinctively navigate and conform.   Even synchronized the acts. So there seems to be an understanding of invisible boundaries and timing. As if to say: “this is how we live together; this is how it works around here”.

Has the “general” definition of kampong spirit runs its course? I can see its benefit in the 1970s to allay the anxieties of village dwellers as they move to high-rise blocks. My understanding is that this notion evolved from 1990s onwards into a Singaporean standard of good behavior, akin to a mark of good citizenry. Today, it is certainly a phrase casually thrown around, broadly understood but is everyone doing the same thing is not clear.

My point is this: leave it. Leave it to the residents to find their own footing on how connections are made and how activities of value to the residents get understood and executed. And exercise what Henri Lefebvre and David Harvey advocate: the right to the city, which Lefebvre defines as people’s “demand … [for] a transformed and renewed access to urban life”. [2]  Not by the individual as a passive recipient but as a responsibility, aptly described by Harvey: “The right to the city is far more than the individual liberty to access urban resources: it is a right to change ourselves by changing the city. It is, moreover, a common rather than an individual right since this transformation inevitably depends upon the exercise of a collective power to reshape the processes of urbanization. The freedom to make and remake our cities and ourselves is, I want to argue, one of the most precious yet most neglected of our human rights”[3] So what are the boundaries of governance?

I am delighted that Tom made time to walk and talk Waterloo Centre, particularly as an “outsider” to the Singapore HDB lifestyle, being born and raised in northern England (born in Bradford, West Yorkshire). I cannot help but imagine Tom’s sensitivity to the utter precarity and renewed resilience loaded onto the common man brought on by the life-changing public policies during the decade of Margaret Thatcher’s government. He writes: “I still hold true to these roots and no matter where I am, I will always be a ‘Northerner‘”, [4]which informs him of a perception of public housing, its architectural configurations and the social engagement that makes a place.