LAU ENG SENG / WHAT TO KEEP? 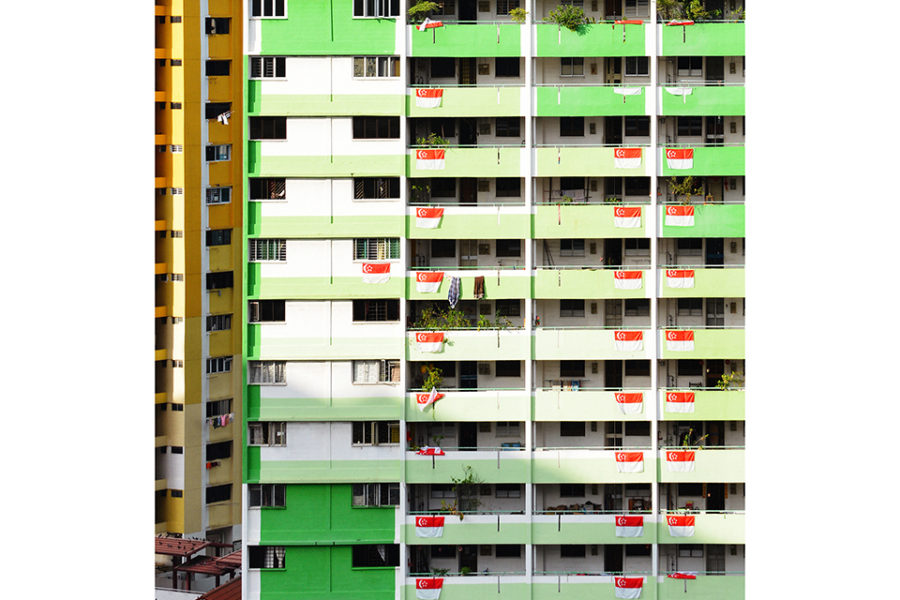 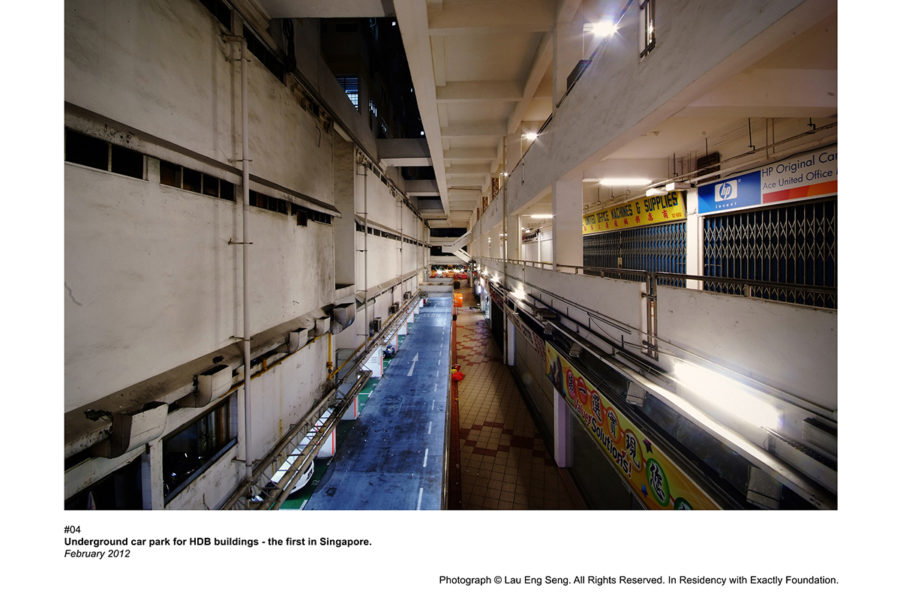 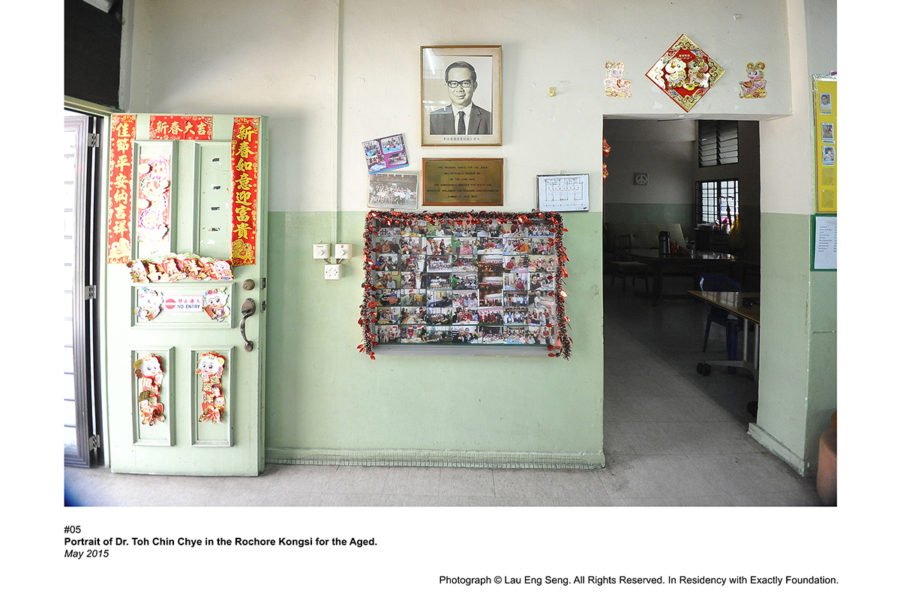 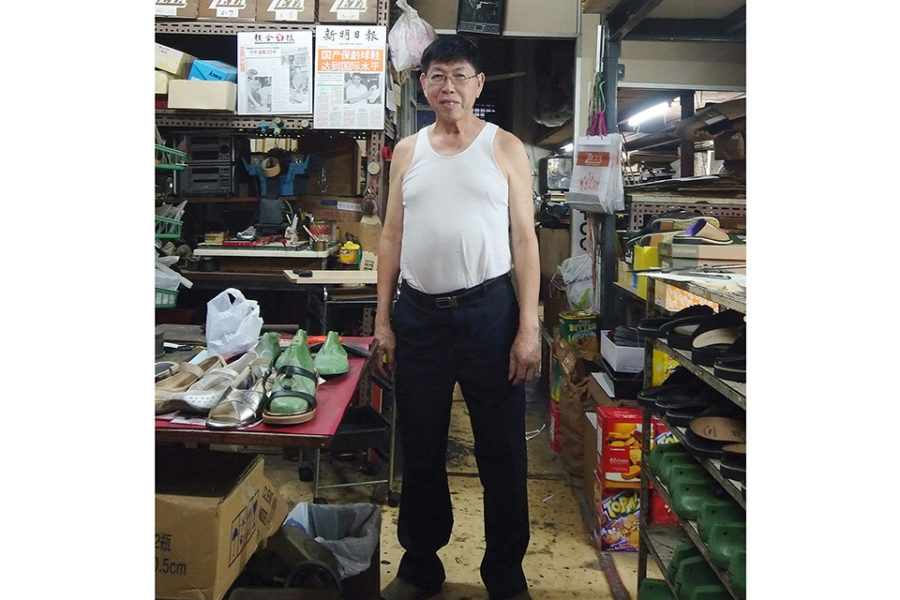 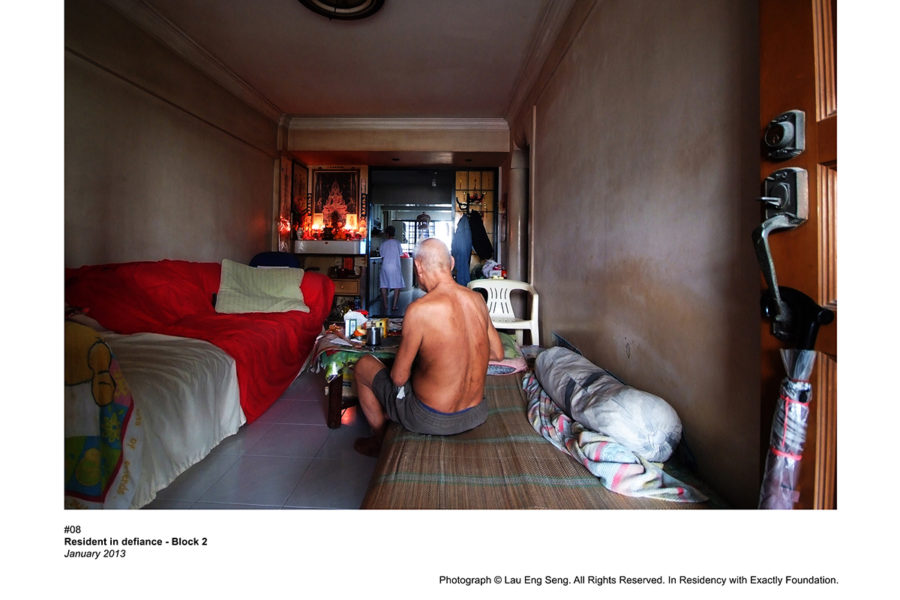 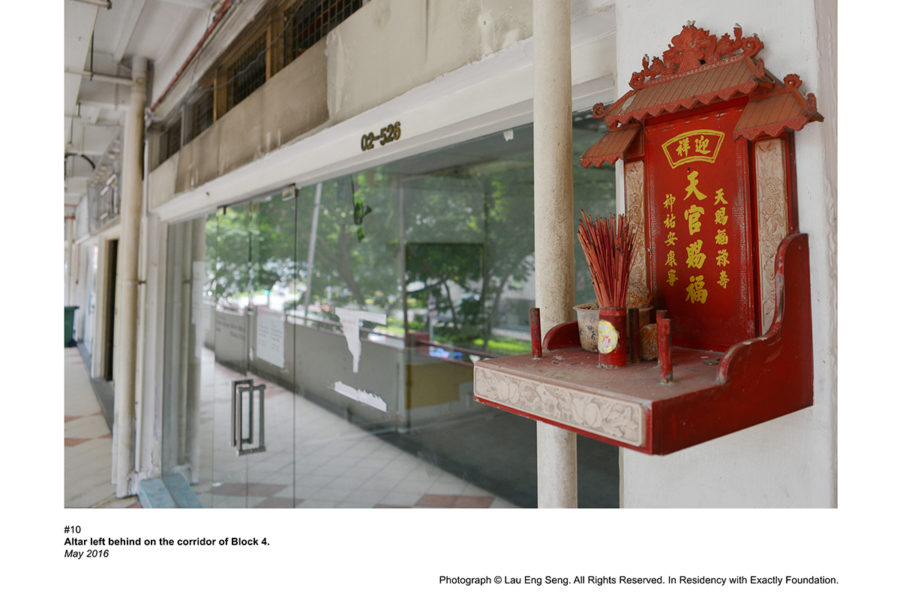 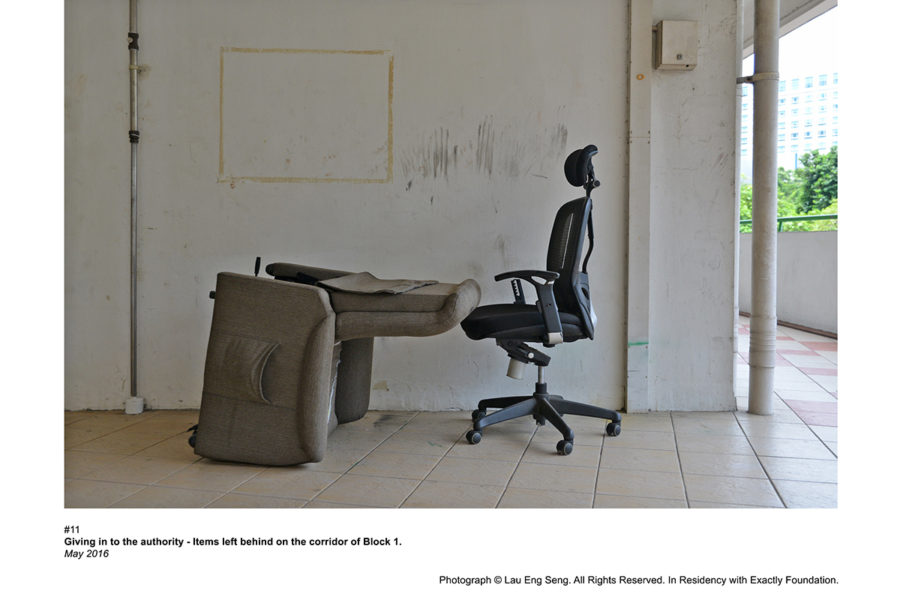 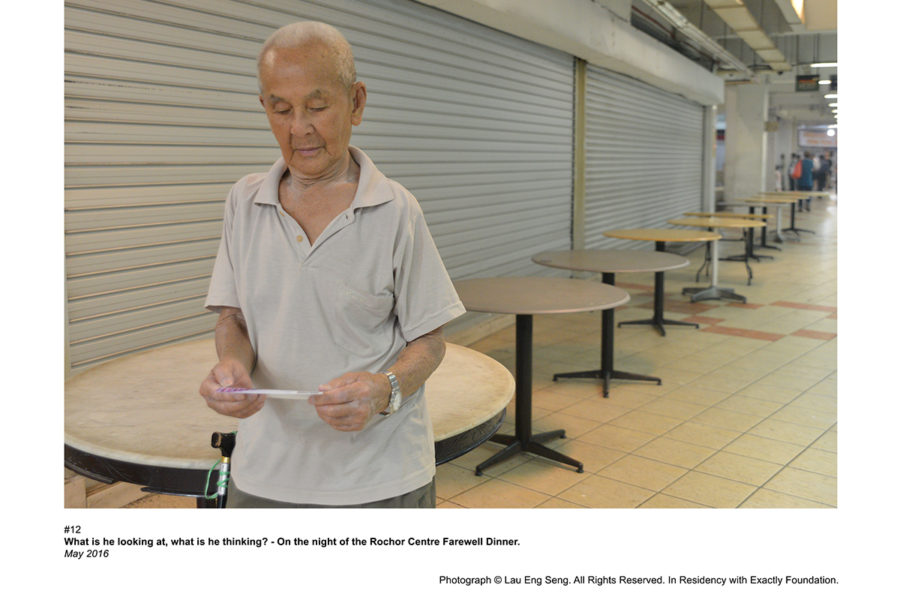 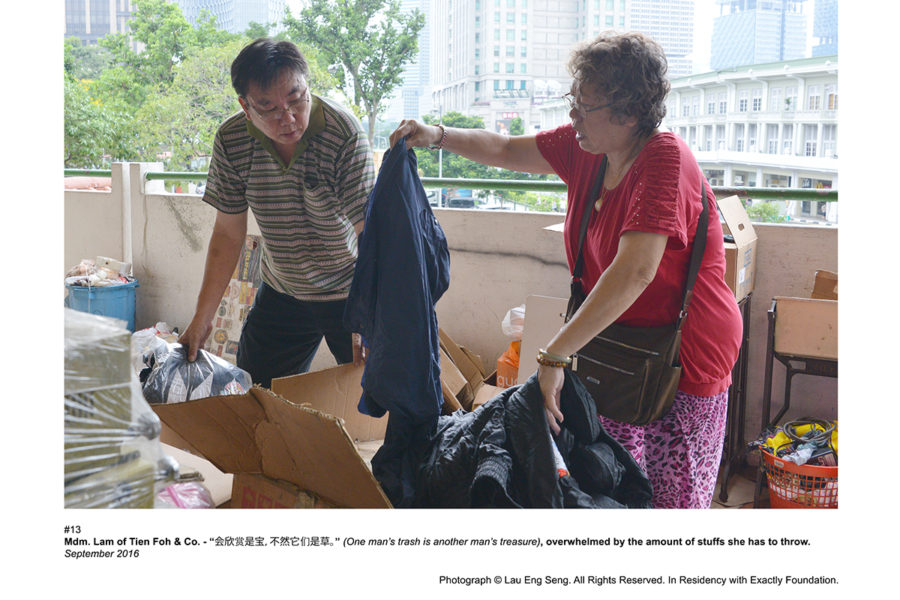 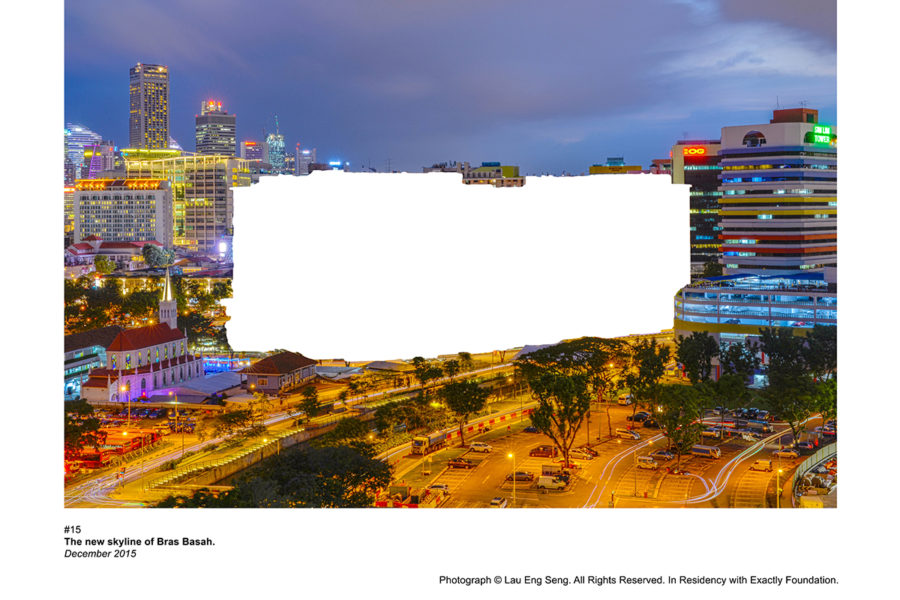 NOTE:  No part of ANY text and material related to “Till We Meet Again – What to Keep?” is to be used, copied, published or quoted without written permission from the author(s).

A question that we find ourselves asking when a situation arises – from progression of a nation to a scenario as simple as moving houses.

What do we keep and how do we decide what to toss?

With the disappearance of Rochor Centre, what are we losing?

Or, do we not ask, is there anything that is for us to lose, in the first place?

What are we losing, exactly?

Rochor Centre was built in 1977, which makes the buildings 39 years old now, consisting of 567 households and 187 shops and eating houses.  Since then, a certain order of community has been forged over the years like a symbol of progress and development for the nation, a territory that has become “our motherland” since independence in 1965. Rochor Centre has over time become a distinctive feature Bras Basah’s skyline with many stories and sentiments exuding and shared among the four blocks of concrete painted with striking colours right in the middle of Singapore’s city centre.

I have since 2009 intensively documented Rochor Centre as my attempt to preserve its memory in photographs and at the same time, investigate what are we losing as we pursue national development and economic growth.

In the progress of my work, I have discovered several intriguing facts: Rochor Centre is among the pioneer blueprints of second-generation HDB buildings – distinct for its community-oriented design with shops, houses and underground car park all connected together within the four blocks – the first in Singapore.  In Rochor Centre is another pioneering effort to integrate the elderly into a community, a home for senior citizens (Rochore Kongsi for the Aged) founded by the late Dr. Toh Chin Chye, [1]; it was his initiative to provide elderly care in the Rochor constituency. His portrait hung at this elderly home’s entrance; such is the high regard for Dr. Toh.

I have also heard many stories from long-time shop owners and residents who have been relocated again and again and about vanishing trades that thrived there such as the only craftsman in Singapore who still makes handmade bowling shoes.  Taking down Rochor Ctr is dramatic:  many are forced to relocate, many are forced into considering retirement.  Some crafts like the handmade bowling shoes would just be gone forever.

Now, the Government has decided not to keep the four-color blocks in the favour of an expressway that will slash commuting time by mere fifteen to twenty minutes. It is not just the concrete that are coming down, but also the lives of Singaporeans in and around Rochor Centre that have to adapt to this change. Should we not ask:   what are those twenty minutes worth compared to an icon that stood for 39 years?

How do we decide what stays and what goes?

Simon Schama writes, “to experience ‘a sense of place’, we must above all use the archive of the feet”.[2]

So what does that make us all, if we progress as a nation without knowledge of our history? We’ve become Singaporeans because of what our forebears committed to nation-building; if we are not keeping traces of them or even Singapore’s physical fabric, we lose our sensibility to feel as living human beings.

What is a nation going to be if it no longer has – if we can no longer see – any hint of memory traces of our culture and heritage?

We may have lost the four blocks of concrete in the name of progress, but what else are we losing here, exactly?

[1] Toh Chin Chye (b. 1921 Perak, d. 2012 Singapore) was the founding chairman of the People’s Action Party (PAP) and Singapore’s deputy prime minister from 1959 to 1968. In addition to his science and technology ministerial portfolio (1968–75), Toh was also the chairman of Singapore Polytechnic and vice-chancellor of the University of Singapore where he was instrumental in establishing the engineering and architecture faculties and introducing business curriculum to support Singapore’s industrialisation efforts taking place at the time. In 1975, Toh was appointed as Minister for Health during which he strengthened specialist care in government hospitals and the establishment of the Home Nursing Foundation to provide home-based care for bedridden elderly.

I often get off the bus at Fu Lu Shou Complex on Rochor Road, coming down from East Coast Parkway.  And come face to face with the four red-blue-yellow-green HDB buildings of Rochor Centre.   You can’t miss them; they must be more than twenty stories tall.  They sit there like a stele in the middle of the road, marking an important place.

And it is … you know you have arrived at a multi-everything area … a massive beehive of shops and humanity.  One thing you see right away are the Buddhist/Taoist paraphernalia shops on the first floor of the red Rochor Centre block where one can stock up for home and public worship, conveniently also at nearby temples on Waterloo Street, if you wish.

On closer look, you can step into the central, open air-well area of Rochor Centre where you can buy groceries at NTUC (the only one in the area), have lunch or dinner, have a snack, drink coffee or beer all day.  Buy inexpensive luggage, buckets, tableware … and toys, stationery, wrapping paper, Chinese New Year stuff, Lantern Festival lanterns … for a song.  Order a suit, develop photographs, go to the bank, buy an amulet, sign up for your child’s tuition.  Just about all mom&pop run.  It’s like being in a bird’s nest – compact, purposeful and so satisfying for one’s “everyday”.

Like all old HDB estates, there’s a breeziness strolling through Rochor Centre.  There’s also a smell about it, like an elderly relative who’s been around a long time.

Just about from anywhere in the Bras Basah area, you can see a sliver of the Rochor Centre.

And we’re not just talking about the human/street level.  What about the pigeons/birds above us and rats/bugs below us?  Where would they go if there is no Rochor Centre?  Like them, we also need the familiar space to scurry about, to loiter, to cool off, to nap, to do nothing and just watch the goings-on.

Soon, we’ll see blue skies, which is not necessarily a bad idea in a dense urban area.  But that peek of a sliver of Rochor Centre will be gone.

Soon, this stele will be replaced by part of the North South highway which is a cut through the territory.  More than a road, it will be a bypass that splits the Jalan Besar/Sungei and the Waterloo/Bencollen areas.  Years ago, there was the Rochor Canal waterway, still there but now covered over.  Rochor Centre connected these two areas.  Soon, a highway will kill off this remaining “natural” scenery and split all this – will there be any reason to go to “the other side”?  And how boring to just walk under a highway.

What happens when our “everyday” changes?  In a Queenstown heritage tour that I recently attended, a 72-year-old auntie (who was one of its first residents) talked about how “everyone knew everyone and checked up on each other” and when I asked where the residents meet, she said it was at their neighborhood wet market, an everyday activity.  This wet market is where kampong spirit happens.  What would it be for the Rochor Centre residents to remember about their “kampong spirit” and could they duplicate this again in their new homes? What would it be like for our generation and those younger – what is our “wet market”?

What do we do that we must do nearly every day to feel like somewhere is our place, our home?

Do we need – want – places to have coffee, buy the quick meal, walk by a bunch of small shops selling the necessary and the crap so that we have reprieve from our small apartments?  I have to admit that in the places I frequent, I don’t see any same person twice much less feel neighborly to have a good gossip.

In this often overlooked banality of what we do every day, what makes our daily lives workable and familiar is actually the most important part of being alive, of belonging.

In Eng Seng’s work, we find the nice and the un-nice:  like the pronouncements of a flâneur (Walter Benjamin’s idea of an urban stroller, characterized by Charles Baudelaire as a “gentleman stroller of city streets” as well as one who understands, participates in and portrays the city). A flâneur could play this double role in city life:  a gentleman while remaining a detached observer — Eng Seng could be that flâneur if we buy into Susan Sontag’s take in her 1977 essays, On Photography.   She described how, since the early 20th century advent of hand-held cameras, the camera has become the tool of the flâneur:

The photographer is an armed version of the solitary walker — reconnoitering, stalking,    cruising the urban inferno, the voyeuristic stroller who discovers the city as a landscape of voluptuous extremes. Adept of the joys of watching, the connoisseur of empathy, the flâneur finds the world “picturesque.”[2]

The picturesque, especially in documenting something that we so fear will be forgotten, turns out to be the everyday and its predicaments.   Isn’t the “everyday” what makes a community?   Isn’t that what is changing when Rochor Centre is demolished, is that what is being thrown away?  Is our position as citizens just being flâneurs?

[1] ‘Wart is short for Stalwart, which Exactly Foundation’s first resident Kevin Lee suggested that for future residences, I should pen a statement as “Exactly Foundation Stalwart” — thought that label carried too much adult responsibility.