Residency #15 – Seelan Palay – I Remember It All

What does it mean to be live with little in a land of abundance?

What does it mean to hope, to dream, in spite of? 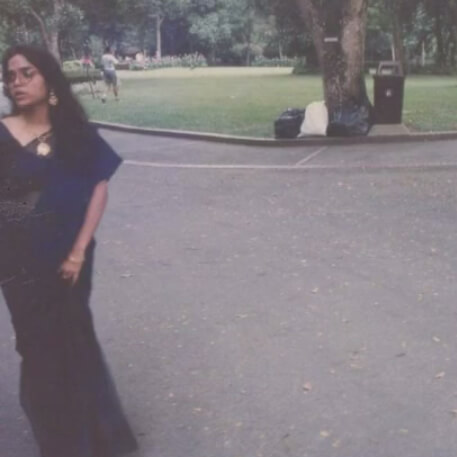 NOTE: No part of ANY text and material related to I Remember It All can be used, copied, published or quoted without written permission from the author(s).

The photograph is literally an emanation of the referent. From a real body, which was there, proceed radiations which ultimately touch me, who am here; the duration of the transmission is insignificant; the photograph of the missing being, as Sontag says, will touch me like the delayed rays of a star. ― Roland Barthes

I believe my fascination with photography — or photographs, to be more precise — first started when I had read Roland Barthes’ Camera Lucida. It was the book that got me thinking more deeply about photographs, not only as images to be viewed and interpreted, but as physical objects within and of time and space. And, of course, most of these “physical” photographs are from the past, the previous century. In the age of digital photography and social media, we rarely develop the images we capture or keep.

My family has hundreds of photographs at home, mostly from the 1980s and 1990s, mostly taken by my father, and mostly of my family. And since we would usually go out without anyone other than our immediate family, he was usually the photographer, the person behind the camera. “Selfies” and “wefies” were not a thing so he was almost never in the frame. I can’t say whether or not he was obsessed with recording images of his young family because I don’t know how many photo albums other people have at home.  But I believe he was, judging by the number of rolls of film he would have used to take this many photographs. Or maybe he knew how difficult it was to capture a “good” record of the moment, one that would immortalize the experience and emotions within it, in a “pleasing” manner. Or maybe he knew that he was an unexperienced, untrained and possibly “bad” photographer.

And the entirety of every roll had to be developed. Every “good” shot, every “bad” shot, every clear or vague image, every person, thing or place (intentional or not) that was captured in that moment in time when he pressed the button that made the shutter move. If it was recorded, it had to be printed; one could not pick and choose which ones to keep and which ones to discard. My mother, she would keep them all, no matter how “right” or “wrong” each of them looked. And she had her way of displaying them. In the sleeves of the albums, she would stack multiple photographs of the same or similar scenes, placing what she thought is a “good” image (an acceptable representation of the scene and people in it) at the very top and below it the others she thought as not “good” images.

Amongst all my family members, I know that I am the one who has spent the most time looking at and examining these photographs, even going back to them every few years. Especially now, since both of my younger siblings have married and moved out of the family home, where all these images are kept. They have their own families now, making new memories, taking new photographs, occasionally printing some of them and putting them up on their walls. I am the only one still living in Woodlands with my parents.

I think there is something fascinating about these developed photographs, not only as images but as objects that we can touch and feel. Their very tactile nature (to me at least) not only reminds one of a person or place but has the capacity to even remind one of the exactexperience at or around that moment in time. And when I say aroundthat moment in time, I mean that I am not only reminded of that one restaurant or trip or day, but the stateof lived experience throughout that period in time. The experience, which consists of the sights, the sounds, the smells, the way it felt to be held, all of these come to the surface much more vividly when I hold on to and look at these developed photographs.

Despite that, and perhaps due to the fact that they were from so long ago, these memories are still very difficult to recall. On the one hand, there are the fleeting and overlapping memories and sensations due to the lack of a perfect memory, or because each one of them, being a still image, a single frame, as opposed to a continuously moving image, is inherently “incomplete”. On the other hand, I wonder if there are some things that I can’t recall because I can’t bear to. For me, these images do not bring about feelings of nostalgia, but melancholia, even when they represent moments of happiness.

For most of my life, my father worked as a truck or taxi driver, and my mother, a factory worker. I think each of these photographs remind me of the statethat we lived in as I was growing up. Though it is probably more correct to say that it was the state that Ilived in, because there is no way that I can precisely interpret what the rest of my family would have actually felt at that (period of) time or how they would feel when looking back at it all. Without ever openly speaking about or discussing it, I know that these memories I have, which remain overlapped with every living moment I experience today, will remain overlapped, subjective and devastating. No matter where I go, no matter what I do, no matter who I’m with, and especially on this island, everything comes back to haunt me.

NOTE: No part of ANY text and material related to I Remember It All can be used, copied, published or quoted without written permission from the author(s).

What is “success” in Singapore? It may still be the popularly quoted 5 Cs (cash, car, condo, credit card, country club) but that may be passé today. We now often hear different letters, additional Cs or lofty comments like “I want to be a decent human being” and the occasional, “it’s not about money”. Knowing that such things do not just drop from the skies, we all know there is at least one path to achieve success. The issue then becomes about these paths, the road(s) one needs to travel, and the lumps and bumps to navigate so as to not get injured along the way.

Nemo in Finding Nemo was advised that all drains lead to the ocean but he should have also been told that there is a lot of sewage to swim through (remember, he was told to go down the toilet bowl?) … before getting the final flush-out into saltwater; but then, for Nemo, seawater is home.

So who creates these drains … these roads to success and their lumps and bumps? They are not necessarily natural. How well … how fair … how just … in Singapore does one road branch to the many or other roads?

No one chooses to be poor, but some are born poor (that word “poor” should also be defined). What if someone wants to be different? What is a child to do? If he/she doesn’t want to live like that. Just when on a road is a lump or bump all right for child to go around … and how high is this bump? There is nothing nice about telling a person that the bump is permanent. Nor is it enough to tell him/her to work harder. Sometimes a bump needs to be surgically removed especially if it is cancerous i.e. it can grow more bumps.

My first conversations with Seelan got interesting when we started talking about our mothers and their dreams. And how some things didn’t materialise … and why. My own mother (who passed away recently at age 100) came from a well-established, Taiwanese Christian family and was schooled in Japan to be a kindergarten teacher, which she did for a few years. Then she married my father, who took center-stage on everything (his employment, where we live, monthly income, etc etc) … except … my mother managed the home, kept the children fed and schooled … except … she managed the family finances. I can never forget the monthly scene of my father handing the small wad of his salary to my mother and he being given daily pocket money, like all of us kids. Yet, every night, when we watched TV together (yes, those were the days), she would eagerly wait and watch intently and longingly at the well-dressed, articulate woman doing the weather forecast. “That’s what I would have wanted to do”, she often said.

If you ask my mother if she had any regrets (that is, not continuing to be a kindergarten teacher or not being given the opportunity to be the weather girl), I think she would give a long-enough pause and say “no”. I think she would have been sincere about her answer because she totally loved her family and totally believed that her life was well lived. The thing she reminded me often was that she is educated, “I speak Japanese and English”, “my success is my family, look at you kids”. Key word is well-lived. Which she has convinced herself that it was. Supporting her self-care perception is a web of infrastructure that got her educated and, importantly, beliefs and cultural norms that shaped her thinking. Imagine if she had wanted to study Geography to eventually map weather, her father (and we’re talking the 1920s in Japanese-occupied Tainan) would have said, “That is unmarriageable”.

Getting my mother, me … anyone to Primary 1 in Singapore takes resources and an extensive network of guardians to move the child along. What we like to and so problematically call “like-minded people”. Now why is that necessary? To me, “how it was”, “what it would have been/could have been” … rings in Seelan’s I Remember It All. So what happened to his mother and why? Today, what’s happening and why?

To Nemo, he’s probably thinking, “What’s all this crap in the drains … ok, nevermind, I’ll get to pristine seawater soon, that’s my goal”.