Between cultural (mis)understandings, national policies, and historic sites, what common ground is there? Are there answers to be found?

“What is being Malay in Singapore?”   I asked around — the answers are always eerily similar: entah, tak tahu.

NOTE:  No part of ANY text and material related to Entah, Tak Tahu can be used, copied, published or quoted without written permission from the author(s).

What is being Malay in Singapore?

Our national policies have always tried to make all of us homogeneous — Singaporeans.

“One People, One Nation, One Singapore.” Are we one and the same?

Are Malays: Javanese, Nusantara, Filipinos and Bugis?  I don’t even know how to get to this answer.

Are Malays the same as “being” Chinese and vice versa? Can one be more Malay than another?

(1) It shall be the responsibility of the Government constantly to care for the interests of the racial and religious minorities in Singapore.

(2) The Government shall exercise its functions in such manner as to recognise the special position of the Malays, who are the indigenous people of Singapore, and accordingly it shall be the responsibility of the Government to protect, safeguard, support, foster and promote their political, educational, religious, economic, social and cultural interests and the Malay language”.

Is Article 152 still valid in our daily lives, do we the Malays, know about it in the first place? Do we even care?

Bread and butter issues, putting food on the table has always been the major priority in my community, everything else can wait. Who cares about articles in the Constitution?

What is Malay-ness? Are we forever a work-in-progress? What are our personal experiences?

Have we shed the labels, such as being tagged “lazy” for more than 200 years?

My friends’ argument does not hold.

Are traditions and progress unable to live hand in hand? It is a well-known fact that the Malays have traditionally loved working together as a community.

We call it Gotong Royong, the notion of “many hands make light work.” However, in this day and age, Gotong Royongseems quite rare.

I think there is no longer the idea of “being collective” amongst Malays but rather, an emphasis on an individual approach to everything. It is all about me, making a living, to put food on my table.

So then… what is being Malay in Singapore? How do we fit in in this new-age global city, open and connected with everyone else?

What does “global” even mean to me, to us?

Against the backdrop of leaving Gotong Royongbehind, of the common perception of ‘Malay cannot own business’, of the need to provide for myself and my family above all else … where do my own cultural landmarks stand?

A good portion of my photography gigs are at Haji Lane. I have no personal links to Haji Lane except for the nightlife parties I photograph on many nights. But I do know that Haji Lane used to be the must-visit stopover point for Haj pilgrims in the region.

Today, Haji Lane is still “global” but completely unrecognisable from its former self.  It is global in the sense of music, food, entertainment – a “mecca” for expats from all over the world. Alcohol, pubs, music, dancing – a far cry from the tradition of spirituality, prayerfulness and worship, literature and scholarship, locations of institutions of learning – all landmarks of my culture (any culture)… and a regional Haj hub of yesteryears.

I cannot relate to Haji Lane events and culture of yesteryears as they are no longer there.  They represent a culture which I am part of but is distinctly removed, because of the new physical space of Haji Lane.

In perhaps much the same way, I had much trouble linking the different parts of this project to each other … Being Malay, Being Global…

To find some answers, I head back to the heart of Haji Lane and went beyond photography. I met up with people who have links to this stretch of road. The people who run businesses, work and play here, finding love, spirituality and more. I asked them the questions that I have.

Why is this project so difficult? I asked around.

The answers were always eerily the same. Entah, Tak Tahu.

NOTE:  No part of ANY text and material related to Entah, Tak Tahu can be used, copied, published or quoted without written permission from the author(s).

What is “ethnic”?  It conjures up a cacophony of colors and exotic dances. It can refer to tribes, rituals and belonging.  It could look, sound, smell different.  It reverberates like a show&tell documentary from National Geographic, always enticing to slide down the slippery slope of “whose gaze?”, just who is talking, benchmarking this ethnic thing?  It feels distant. It feels uncomfortable.

Ethnic to me also often conjures up something of old, preserved but not always understood.  It conjures up the lurking of a gap … a lacuna … like something missing and could well be important to know.

But some things may never be known.  Like who is my great-grandfather?  The photo below commemorates my parents’ wedding day, circa 1943 (circled), taken with my fathers’ parents and siblings (the two eldest sisters, so beautiful they married into wealthy Taiwanese tea-trader-tycoon families, in the front row, left of my grandmother holding first Chung grandson).  What is striking to everyone is my father’s look … he was so tall, nearly 180cm, unusually tall for people in his generation of the early 20thcentury.  Why was he so tall?  Why were the colors of his eyes light? The family folklore is that we don’t know who his grandfather was — was he a traveling peddler from China, a Taiwanese indigenous man, a European …?  My father’s grandmother had been widowed and had a liaison with this “mystery man,” who left before their baby was born.  As the clan’s name is Chung, the baby, my grandfather was so named.  I find it so confounding that if our family tree had been properly recorded, I could well have a different surname. 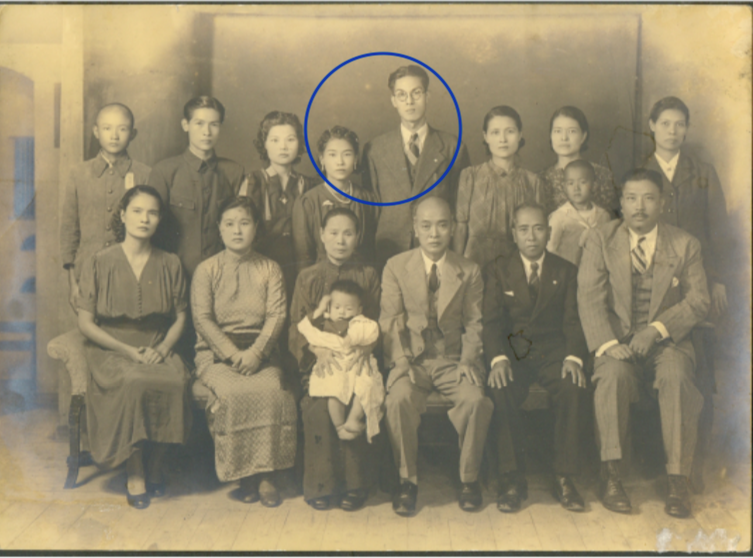 Shahrom’s Entah Tak Tahu (“I don’t know” in Malay) refers to this lacuna of knowledge and memories and his artist’s statement is deliberately filled with questions. The paternal lineage used in Singapore’s CMIO (Chinese Malay Indian Other) classification sidesteps the rich ancestry that many of us have.  Maybe if I know more about my ancestry, I could be a M or maybe an O.  Aren’t many of us really O’s?  In the flattening out of racial groups in Singapore and the loss of our personal ethnic histories, we risk being all same-same, all with little time for such musings, all chasing after today’s well-being.

I sort of know what is in my ancestry and I sort of don’t. Does it matter?  Most days, no … because I’m so consumed with living my “today”. But I wish I know. So I can exorcise the angst of being classified/surnamed /gazed at … and be free to get on with enthusiasm.

[1] Wart is short for Stalwart, which Exactly Foundation’s first resident Kevin Lee suggested that for future residences, I should pen a statement as “Exactly Foundation Stalwart”. Thought “Stalwart” carried too much adult responsibility … ‘Wart will do.