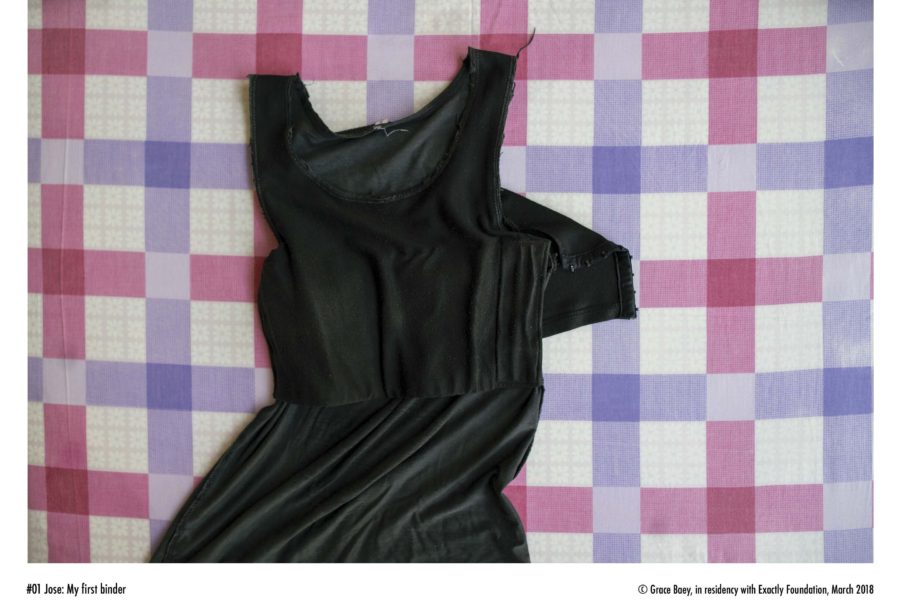 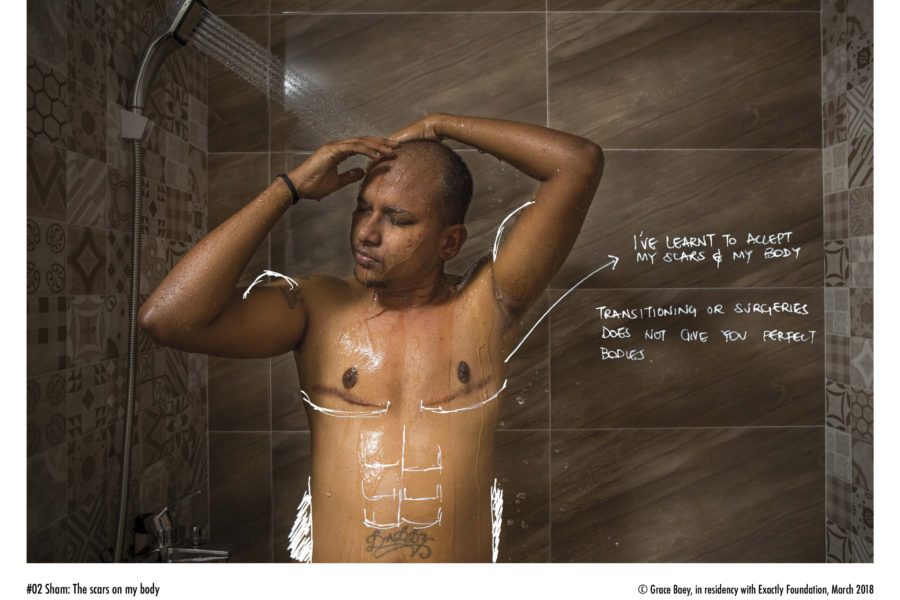 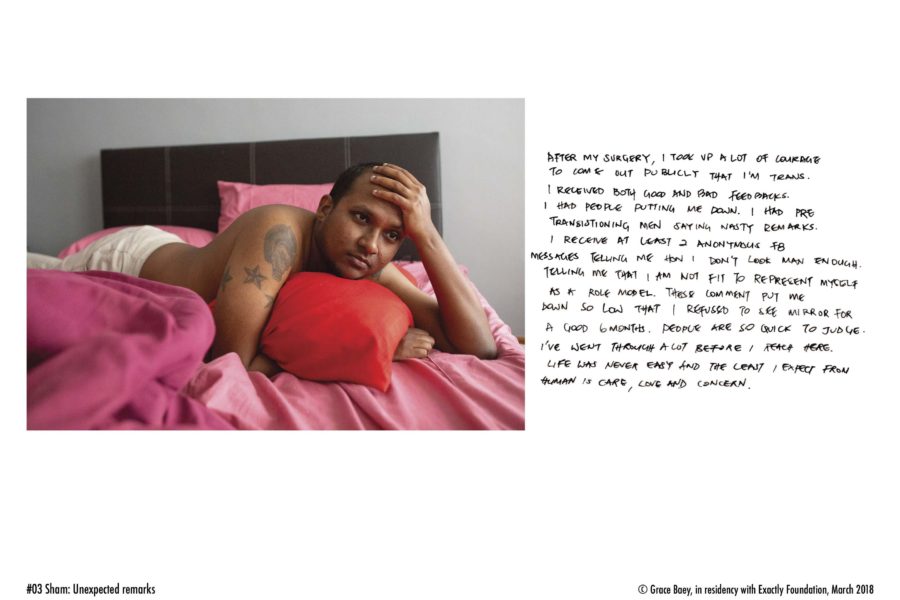 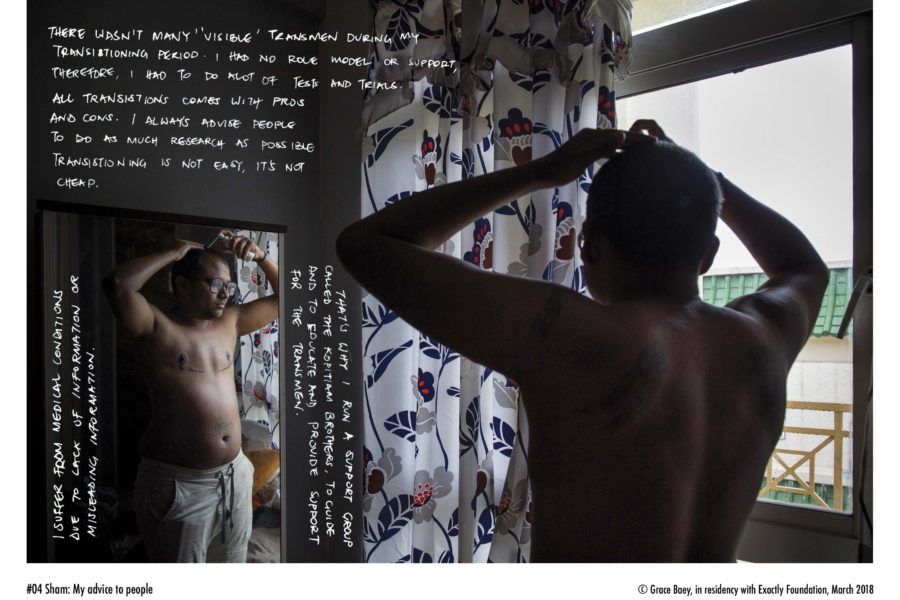 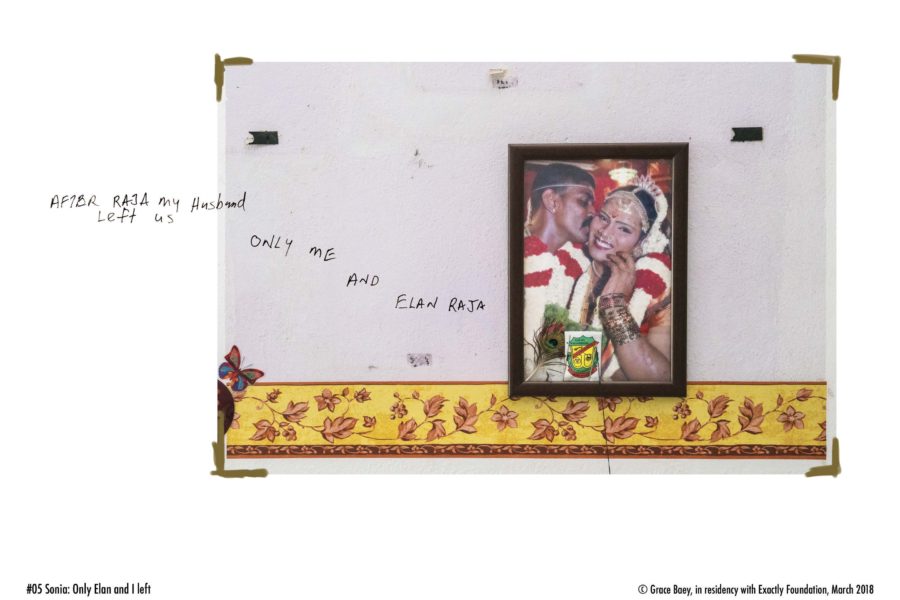 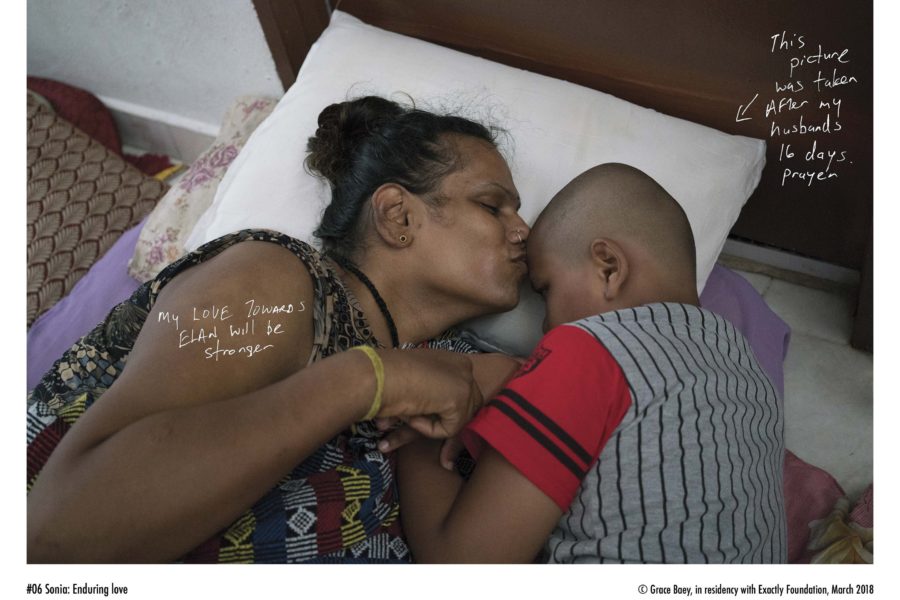 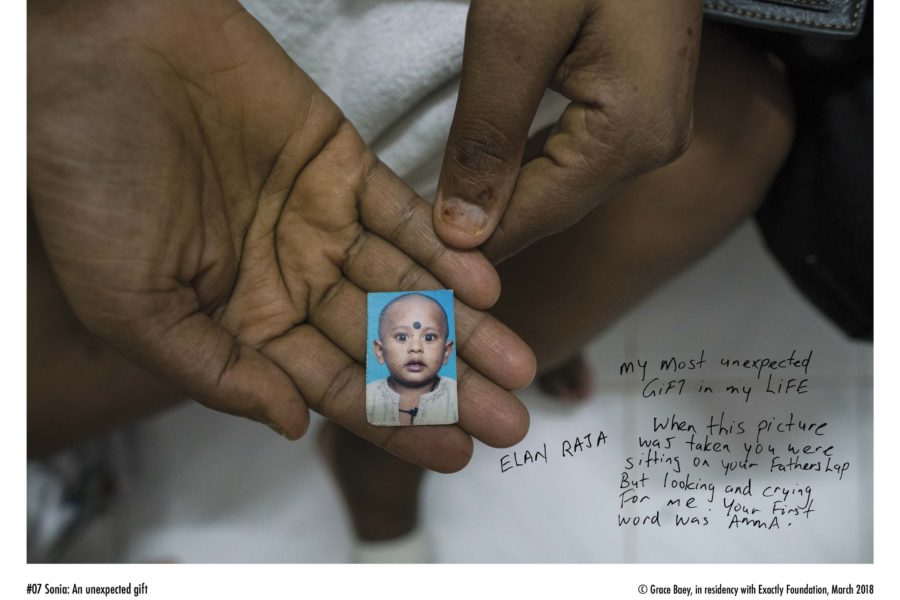 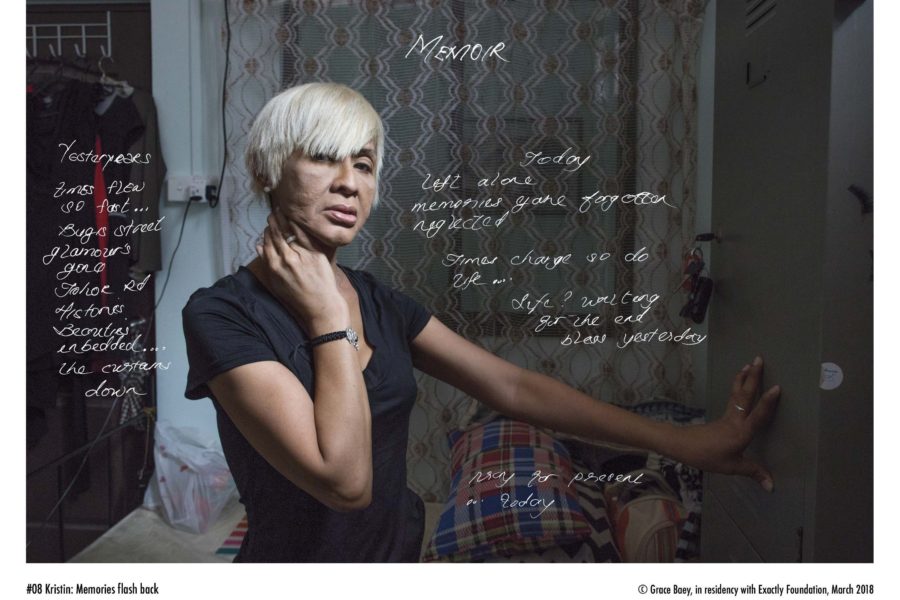 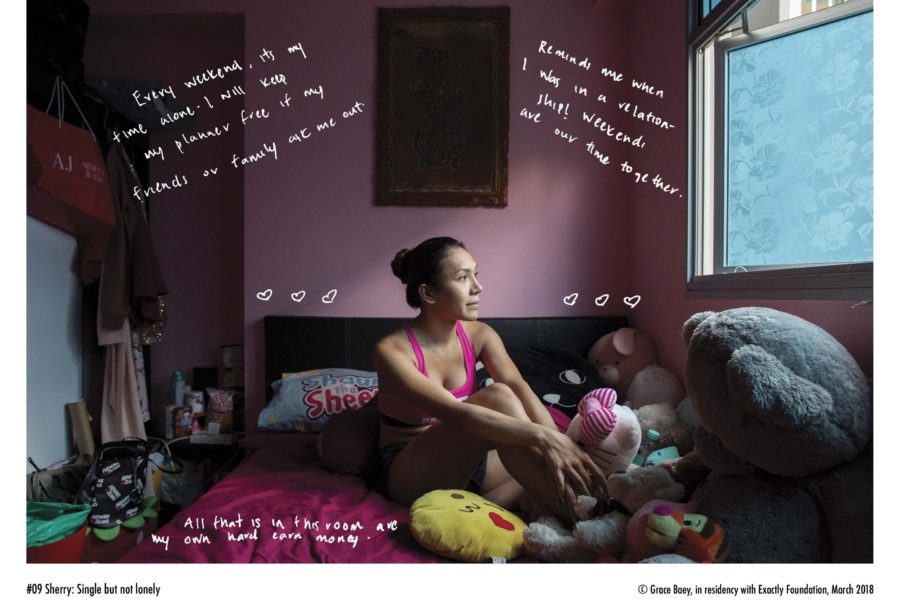 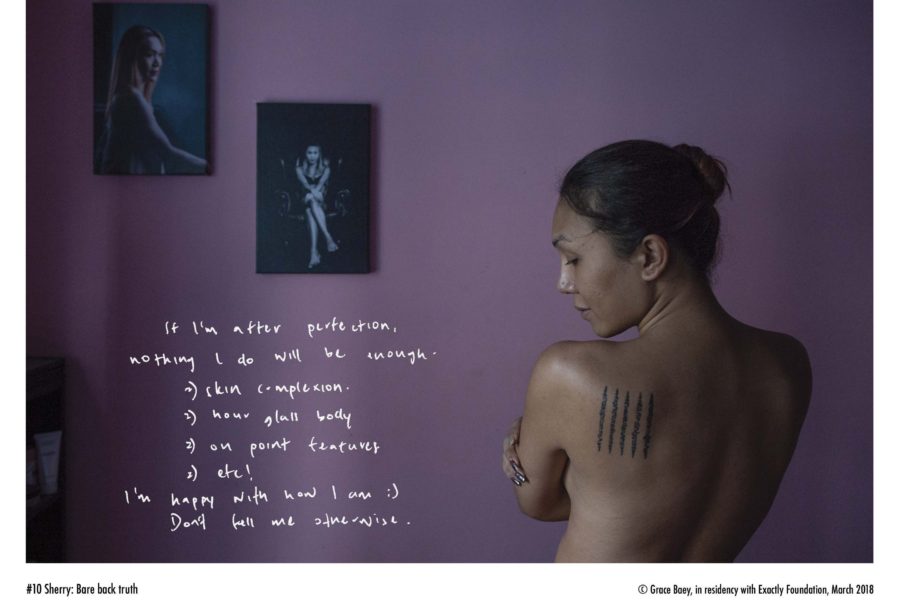 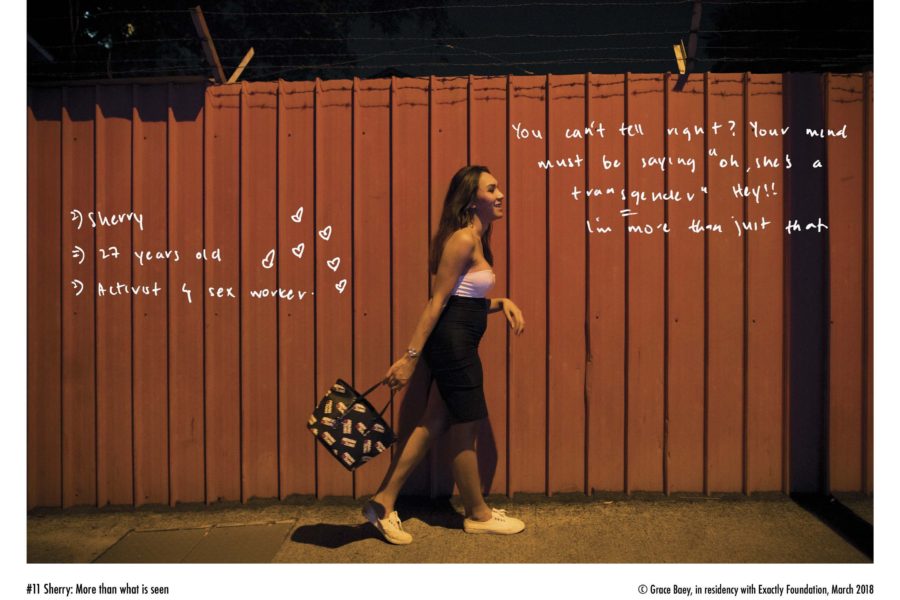 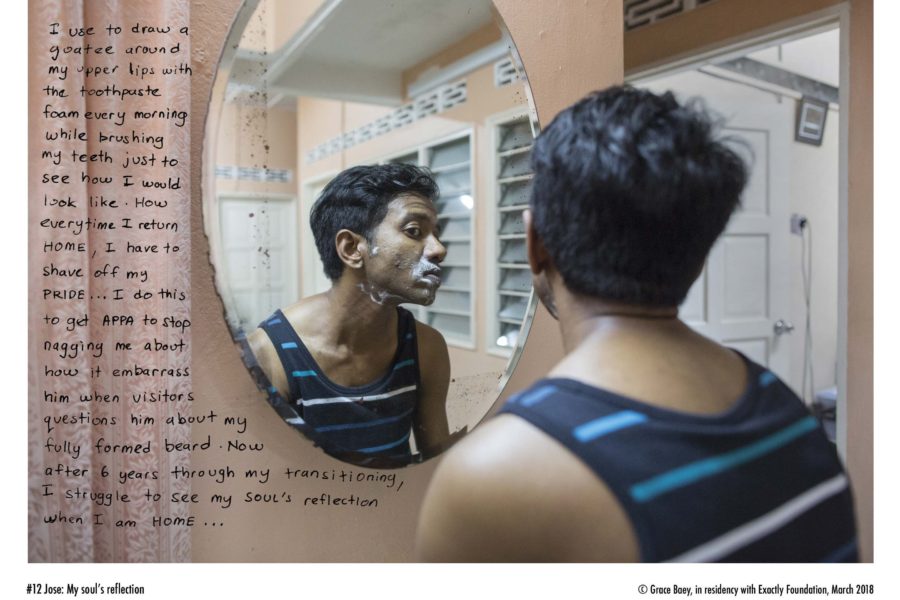 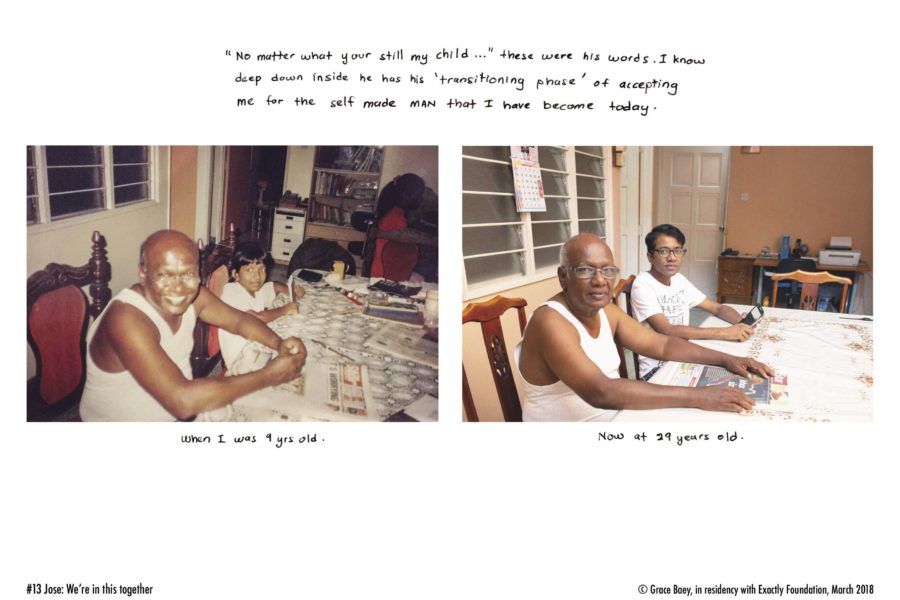 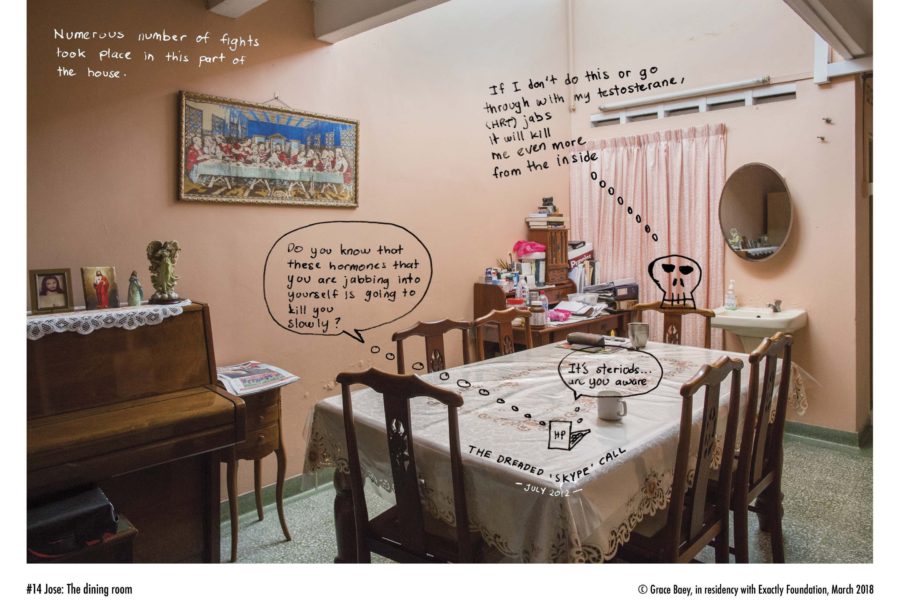 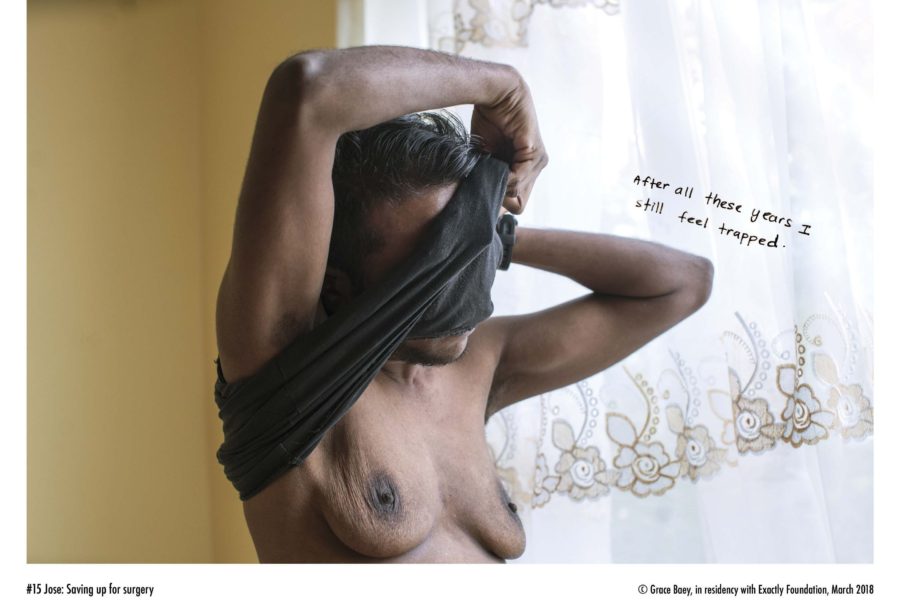 Writing on the Wall

Even though sex reassignment is formally recognised in Singapore, many trans men and women share that social acceptance remains a persistent challenge within the context of family and wider society.

“When we are transitioning, our families are also transitioning with us. It’s not easy for both sides. It takes time,” says Jose Jude, a 29 year-old trans man.

Through collaborative storytelling, this project explores how members of the transgender community negotiate issues of place and identity through the realms of family, parenthood and society in Singapore.

Exactly Foundation – Residency #11 – Writing on the Wall by Grace Baey

NOTE:  No part of ANY text and material related to Writing on the Wall can be used, copied, published or quoted without written permission from the author(s).

I have thought a long while about how to work on a project about transgender identity that would be meaningful and collaborative – something more than just pretty or “visual” pictures which often just feed into negative stereotypes about the community. Portrayals of trans men and women in the media are usually sensationalized and hypersexualized, which paint a very limited view.

I started this project with a basic goal: to start conversations and build understanding. And I thought that I would start the ball rolling by incorporating conversation into the pictures, where story subjects tell their own stories as part of the pictures we make together.

The process involved us having conversations about specific aspects of people’s stories that they wished to focus on for the project, making the pictures together, printing out the pictures, and having them write their responses and thoughts on the pictures.

The series is entitled Writing on the Wall, alluding to personal thought and expression amidst societal boundaries and divisions. The metaphor of the wall often comes up in my conversations and interactions with both the LGBTQ+ community and folks from the conservative right. The wall can signify power, but it is also people’s coping and defence mechanisms when threatened.

Despite Singapore’s history of being a regional hub for gender reassignment surgery, alongside old Bugis Street in the 1970s and 80s, it feels as if we have taken several steps backwards in terms of social acceptance. Whilst gender reassignment is formally recognized by the state, many trans men and women still choose not to be as open about their identity in view of stigma and discrimination.

I emphasize identity because transgender and gay identity are not “lifestyle choices” as some would assume. For many transgender persons I know, transitioning is not so much a choice as it is an inevitability. I have seen the tremendous costs that people pay – be it physical, emotional, social, and/or financial – to be who they are. Nobody would undertake these costs just for the sake of.

When asked what it felt like to go through gender reassignment surgery, Sham, a trans man featured in the project, shared that his first sentiment was one of relief. “After going through so much to transition fully, now I can die peacefully in the right body,” he said. “This is how much it matters to me.”

These stories are born out of courage and struggle – many, only after years of coming to terms with gender dysphoria and life circumstances – and I am very grateful for the willingness of the people whom I have photographed to share these intimate stories in public.

Jose said to me: “If you asked me a few years ago, I probably wouldn’t have agreed to let you photograph me because my dysphoria was so strong. But I’m tired of seeing all these perfect bodies on the internet, and it doesn’t help your self-image. People need to know the reality of what transitioning looks like.”

We hope that the pictures would invite people to look deeper and within, instead of the common once-over on the street. We also hope that the work would speak to individuals in the LGBTQ+ community who are currently transitioning or thinking about it.

NOTE:  No part of ANY text and material related to Writing on the Wall can be used, copied, published or quoted without written permission from the author(s).

Why do we stare?  A friend from a progressive, social-welfare generous country once said to me, “I could never marry you. No one in my country looks like you”.  That was 40 years ago.  I asked years later about this comment to which he updated, “Well, we see many adopted Korean orphans now.”  Attitudes are slow to change.  How can such comments be so casually tossed around? Why do I still remember after so long? Because it sounds … all so outrageous.

Another slow burn is the commonly known story of Indian Buddhist bodhisattva, Avalokiteshvara,[1] who changes from male to the female Quan Yin,[2] the now widely worshipped Chinese deity.   How did that happen?  It could be that in the worshippers’ sojourn from India throughout China and Southeast Asia, Avalokiteshvara’s gender reassignment evolved to suit a local view of who “looks” more believable delivering compassion, mercy and protection. Somehow, crying for help in a fire or shipwreck feels better when praying to a female, motherly figure. In Buddhist art, Avalokiteshvara is sometimes shown with eleven heads, a thousand hands and eyes on the palms of each hand.  His thousand eyes allow him to see human sufferings and his thousand hands, to reach out to save.[3]

That Avalokiteshvara/GuanYin gender assignment is supposed to have taken centuries, across many lands. Today, few worshippers fuss over this gender change.  Even fewer stare at GuanYin like some freak show item.

How do we teach our children, how do we tell ourselves … not to stare?  But to accept and respect others for who they are, never mind how they look. All very magnanimous to preach but often so difficult to practise.  Is it all right to ask “what’s your story”? The journey of gender assignment can’t never be taken lightly.  It can’t seem to just about a mental state.  It is years of treatments and surgeries, at great financial and emotional costs.  Back to the Hindu religious pantheon, Ardhanarishwara, a composite androgynous form of Shiva and his consort Parvati, is depicted as half male (Shiva, on the right) and half female, split down the middle. Nonetheless, it doesn’t mean that India today is a haven for the transgender/transvestite community. Eminent Indian photographer Dayanita Singh documented eunuch or hijra Mona Ahmed’s story of struggles and rejection in her long-term project that culminated in her book, Myself Mona Ahmed, published collaboratively by Ahmed and Singh.[4]  India’s Supreme Court in 2014 recognised hijra (including transgender, eunuchs, intersex people) as “third gender,” as have other South Asia countries. I recently saw a Singapore exhibit about our Bugis heritage that explains that that tradition references five genders.  The plot thickens!  Singapore has long allowed for a transgender individual to legally change his/her gender and reflect so in identity cards.

So why are we still staring?

[1] Avalokiteshvara is a major bodhisattva (one who is able to reach nirvana but delays doing so to free human beings from suffering), one who leads and guards the world in the interval between the departure of Buddha (Gautama) and the appearance of the future buddha, Maitreya.

[2] Translated from Chinese, “Kuan Shih Yin” or Quan Yin is “kuan” –  to observe, “shih” – the world (of sufferers), and “yin” sound, our crying sounds pleading for help.