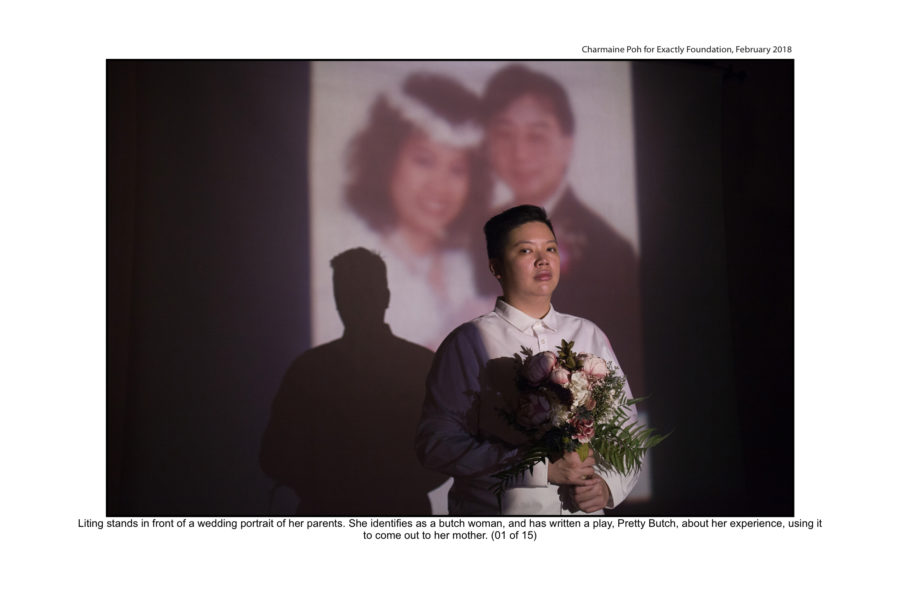 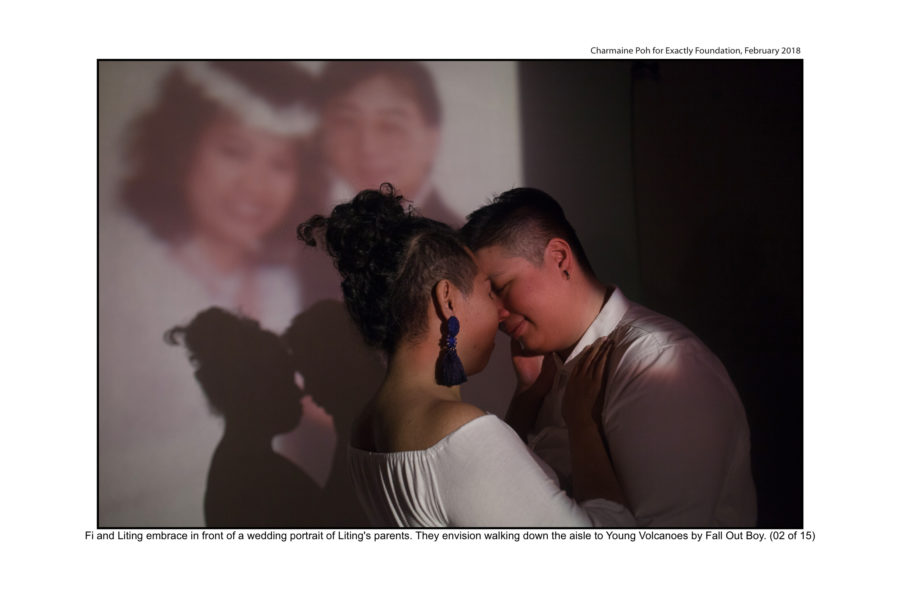 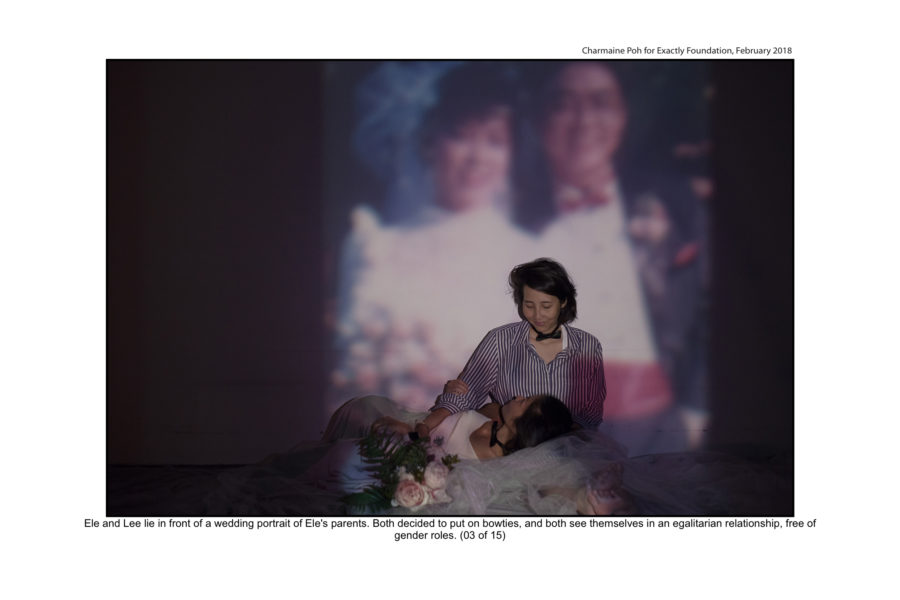 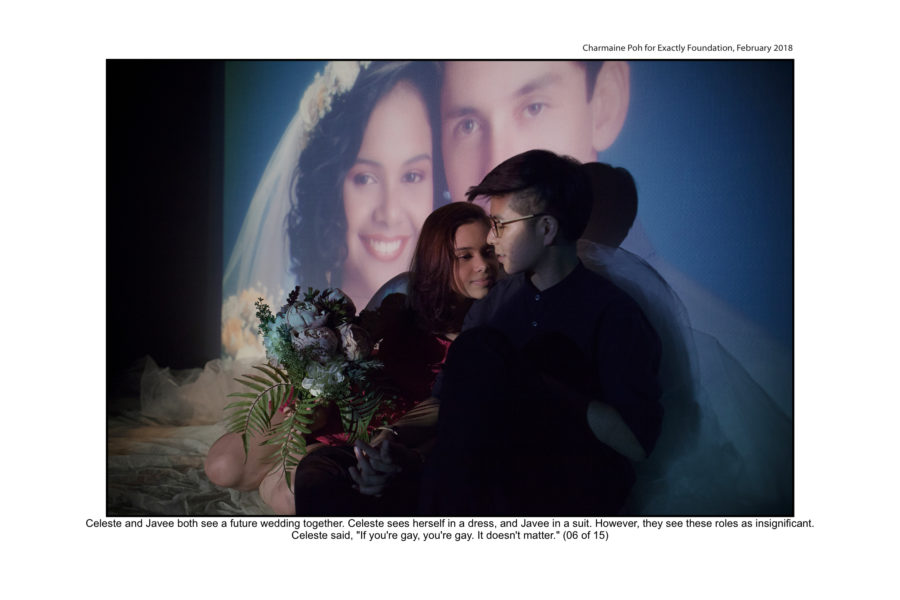 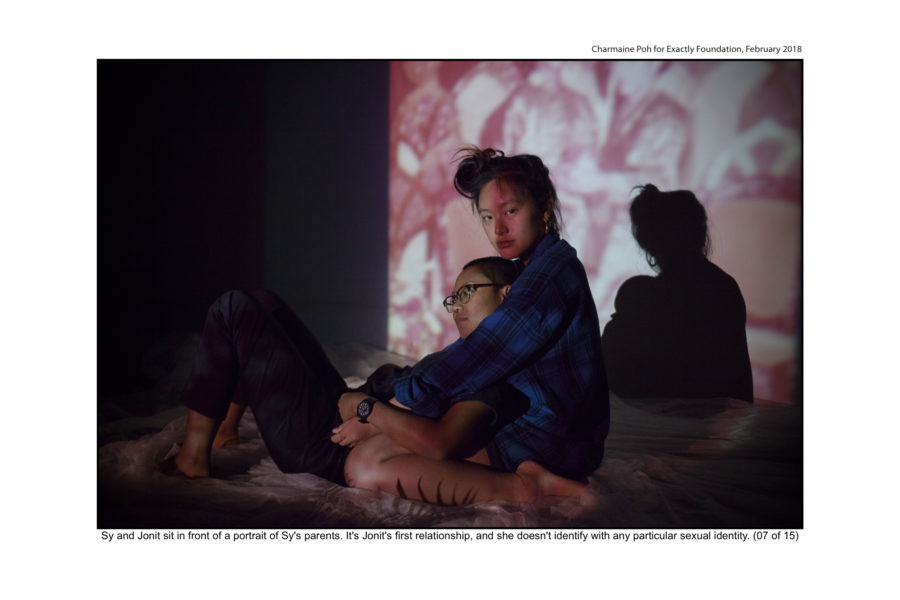 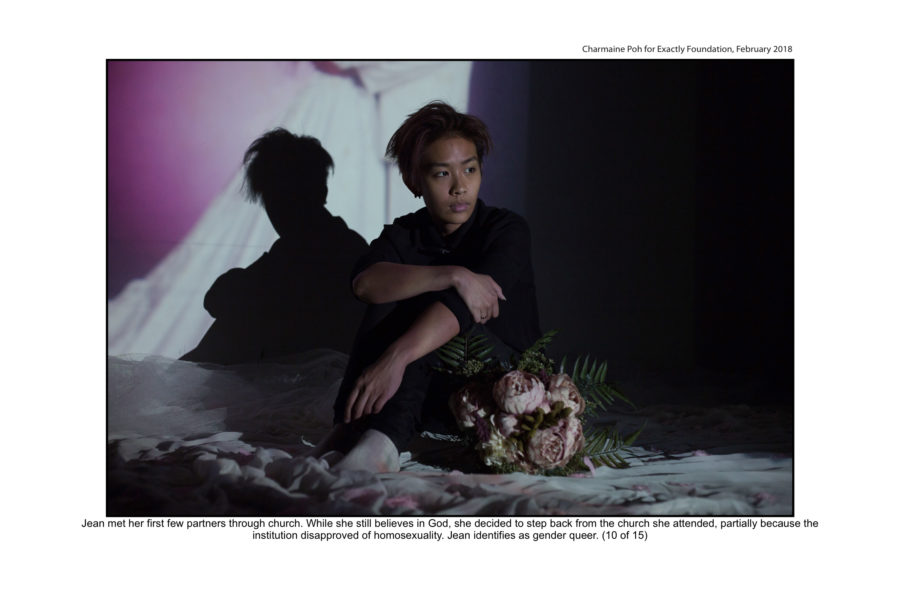 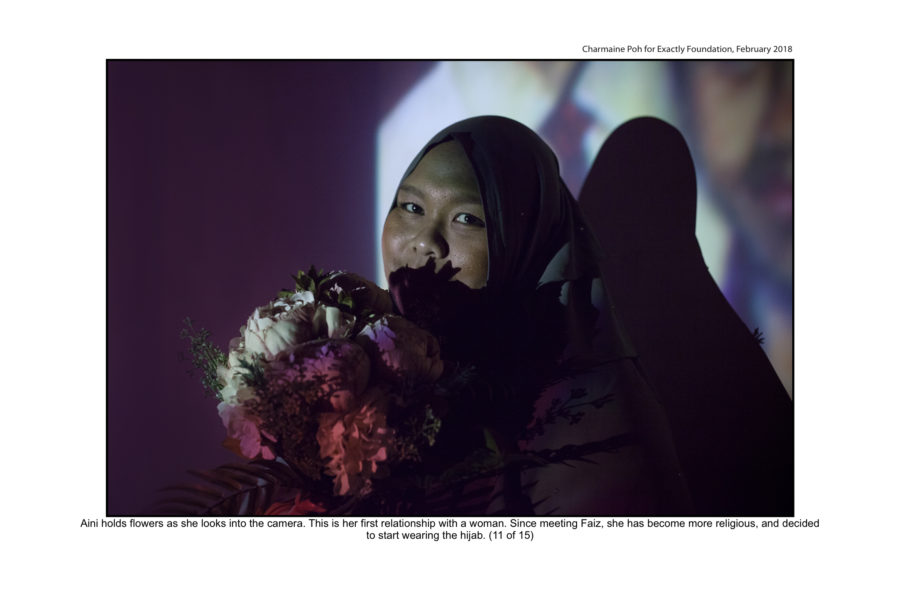 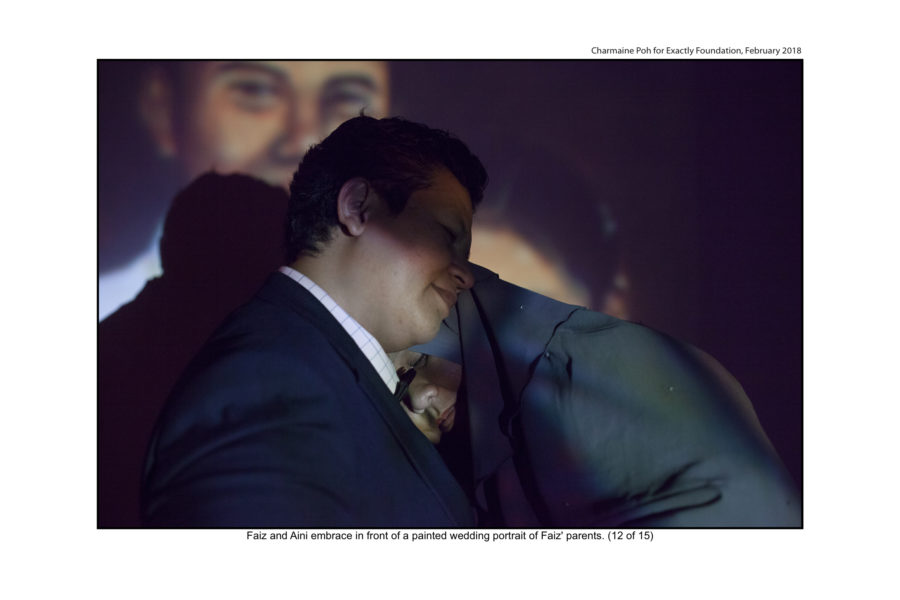 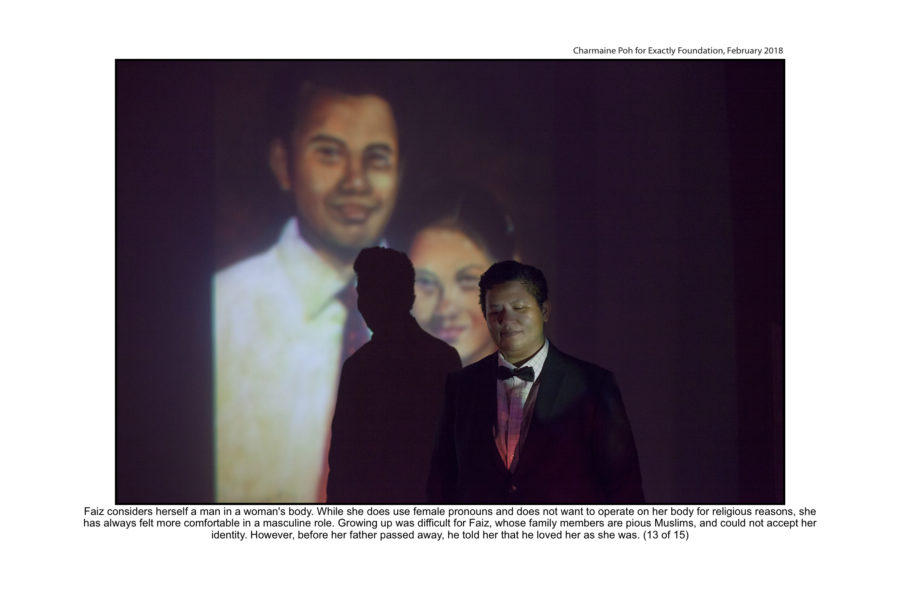 How She Loves by Charmaine Poh, February 2018

What does it mean to love someone of the same gender, and why is it such a hard thing for society to understand?

This project explores the lives of queer women in Singapore who try their best to love in spite of circumstances. 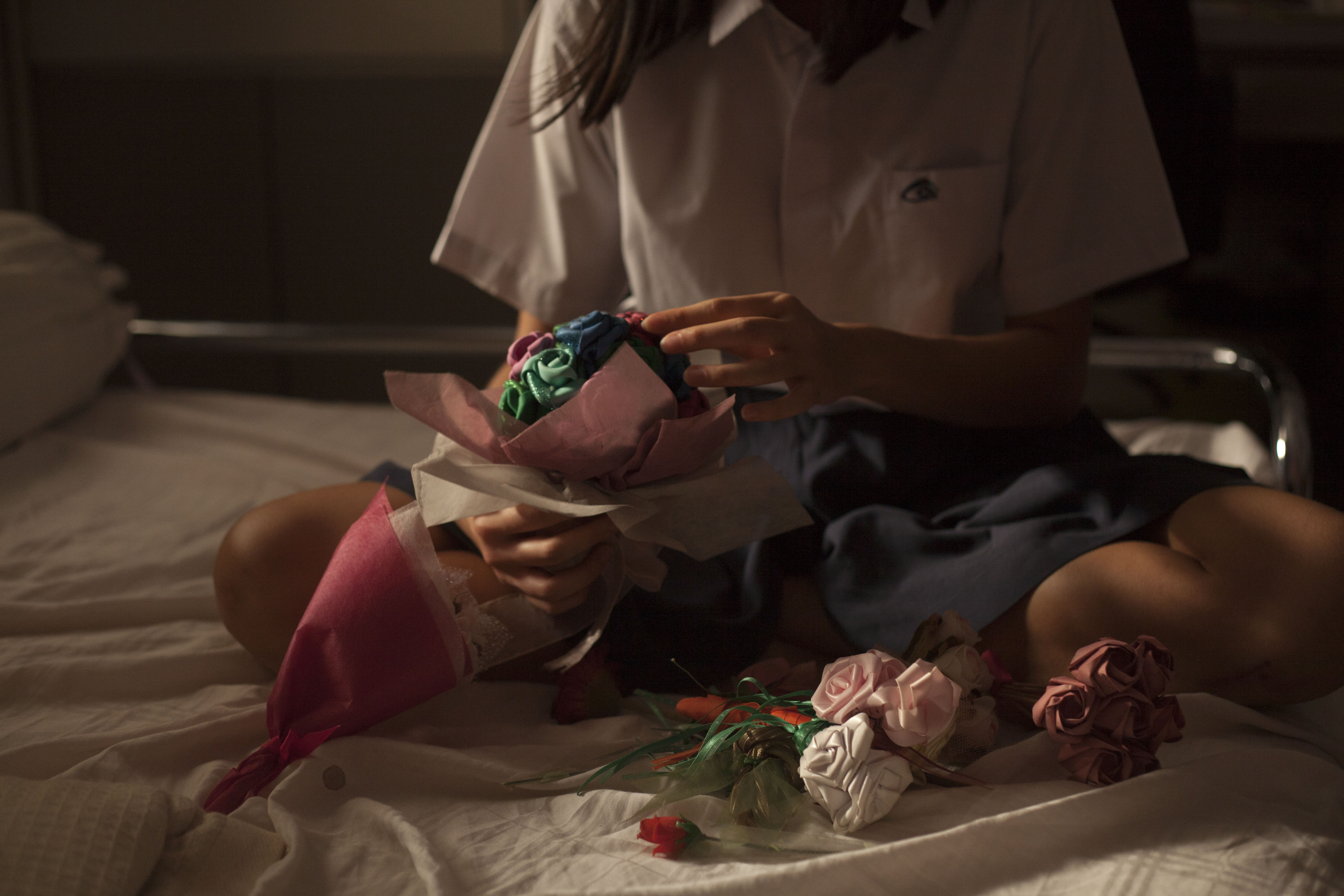 NOTE: No part of ANY text and material related to How She Loves can be used, copied, published or quoted without written permission from the author(s).

The LGBTQ community has become significantly more prominent in the last decade; with the most obvious example of Pink Dot reaching its 10th year anniversary, and with an increasing number of attendees each year, it is become more accepted that this symbol of a gay rights rally is and will continue to be a part of life here. Other recent initiatives offer a glimpse of support for the community: 2017 alone saw the publication of a guidebook for LGBTQ couples, and the Methodist Church made efforts to engage in dialogue with the leaders of Free Community Church. A 2010 survey done on Singaporeans’ attitudes towards homosexuality indicated that they were becoming more positive. It suffices to say that public opinion is shifting, even if slowly.

And yet the tensions remain. Activists and journalists have long brought up the existing Penal Code 377(A) as a stark reminder of the community’s lack of acceptance in mainstream society. The censors continue to mark media content that mentions homosexuality, justifying inclusions of it as a form of glamorization and/or promotion. And for every year that Pink Dot is organized, there are groups countering its vision.

Singapore seems to be at an uneasy spot, one caught in between the need to pursue its liberal free market economy, and with it, the Pink Dollar, and one that is trying to maintain the secure status quo of traditional, conservative views. As a result, while the LGBTQ community does not currently face widespread violence nor discriminatory arrests, it also has not obtained an outright acknowledgement that they belong.

It is a topic that has, and continues to, divide society. In 2013, for instance, an Our Singapore Conversation survey on censorship and homosexuality showed that Singaporeans overall were still resistant to accepting homosexual lifestyles or same-sex marriage, even as younger and more well-educated Singaporeans showed more support. A similar divide was seen during 2017’s Pink Dot; when the government announced new restrictions banning foreign businesses from sponsoring the event, local businesses rallied together to raise funds.

For all of Singapore’s known successes, the local LGBTQ community is made up of lives that come up against the system.

With such divides and tensions, there is clearly still a need for dialogue. More specifically, there is a need to understand the nuances lie under stereotypes and sweeping prejudices. The LGBTQ community is not homogenous; it is made up of individuals with their own set of struggles and processes of navigation. What do we understand, and what don’t we? What are the conversations that are so difficult, and so necessary?

As a storyteller focused on social issues, I wanted to make work about a particular subset of the LGBTQ community that often flies under the radar, that of queer women and the lives they lead. It is my hope that through this sliver of a window, there can be a deeper understanding of the complexities of these individuals. In the end, that is what stories from the fringe do: they provoke and challenge; sometimes they even induce empathy.

How She Loves is a series of portraits of queer female couples coming from a diverse range of backgrounds. I invited them to come to a studio, where I had set up wedding props, tropes of matrimony, and asked them to play make-believe. In making these images, we created a world that existed only through my photographs. Along with petals and cloth, I had brought two veils and two bowties: in giving the couple free reign to portray themselves, I wanted to capture their sense, if any, of gender roles, and the ways in which gendered structures have informed the way they carried themselves and their relationship.

I had also asked them to bring photographs from their parents’ weddings and chose to light the scene by projecting these memories onto the studio wall. I wanted to put up a visual reminder of the social reproduction of the heteronormative histories that continue to impact and influence these lives. For many, family remains a source of tension, and I wanted to acknowledge that. At the same time, having those projections was a visual way of juxtaposing the accepted norms of then, with the lives their children lead now.

In visualizing these portraits as such, I wanted to challenge heteronormative visual culture and offer an alternative.

All of these portraits were taken after lengthy interviews, during which the couple would share about their history together, their thoughts on their relationship, as well as their experience of being queer in Singapore. All my work is generally made this way; I see my narrative-driven portraits as a result of hours of mutual sharing and collaboration.

To Claire and Amanda, Fi and Liting, Ele and Lee, Faiz and Aini, Sy and Jonit, Jean and Xener, and Celeste and Javee: thank you for letting me into your lives and allowing me to be privy to remarkable moments.
Articles:

NOTE: No part of ANY text and material related to How She Loves can be used, copied, published or quoted without written permission from the author(s).

What is love between two people? It’s a feeling we all know and yet don’t know, really. Is it truly from our inner self or have we been programmed in some invisible, mysterious way to have this specific feeling? Or are we told by many around us what this love is … or should be … and oh, and which type of love is it? The Bible verse this week in my church is entitled Expected Fruit – Love: Beloved, if God so loved us, we also ought to love one another (1 John 4:11). Which love? We are often told there is a difference between acceptable and unacceptable love.

Since my own young adulthood and throughout my early motherhood years in the 1990s, I have loved watching The Muppets and marveled at the longevity of its characters especially the irrepressible Miss Piggy with her unrequited love for Kermit. I think, though, it is love reciprocated, in a Kermit-platonic sort of way. I know it is not possible for a pig to be in love with a frog, it’s not natural, not of nature. Yet, my son and I never fussed over that fact, we just relished in Miss Piggy’s antics and Kermit’s cool dude-ness. And just accepted that it is enchanting and frustrating to be in love. Including miscommunication all the time and everywhere.

Then, there is this other thing: marriage. I once heard a BBC speaker discuss her research on the history of marriage. She said that in the old days, marriage was not like what we know it today; specifically, there wasn’t this preoccupation of “being in love”. Often the marriage was arranged. She started by saying that the purpose of marriage was to get in-laws! What she means is marriage is to expand the family’s labor pool: a girl entering another family is an extra pair of hands and the possibility for procreation, delivering more and younger laborers and ensuring that the family or tribe continues to survive. Was there a ritual? Sometimes. In ancient times, the paperless seal was more like a pact, a verbal agreement between peoples that a change in their family units has occurred. And it may not include any agreement by the married couple themselves, just a daughter shipped off, often even the groom has no say. But the sweet vow to stay together is of permanence, a real commitment.

A good friend once told me when I asked her why she is in a same gender relationship: “I don’t even think about gender, I just know that I love her and she happens to be the same gender as me”. That impressed me, that she did not consider the gender of a partner. My friend is Catholic and her partner is Muslim. Friends knew and accepted, family had no idea. The tussle for them together and individually is the two Fs: Family, Faith. Coming out for them is out of the question. Parents think they are best pals, flat mates and like most of us, are not overly concerned about two young women being close. Tallying up to Christian or Islamic tenets for them is difficult, and so they stopped their religious practices.

So, is being lesbian a choice of lifestyle or an instinctive stirring, something more primordial? One thing it is not: “a modern-day problem”, some result of today’s mass media evil. Research exists on China’s same-sex female relationships of the late 19th-early 20th centuries, about “sworn sisters”, and specifically on the ma jie (妈姐 ”mother-sister”) who were young girls from south China leaving impoverished conditions to work as household help, e.g. in Southeast Asia. They pledge celibacy and sisterhood with other ma jies but some were indeed in lesbian relationships. They are considered hardworking and most loyal, sometimes providing the only “maternal” care to children in wealthy but dysfunctional households. Long-term, same-sex female relationships are not new to us.

So as Singaporeans, how do we sort through this? How can a young female Singaporean sort through her feelings? One Christian priest commented that he can deal with women holding hands in public but not men. Why this double standard and so casually thrown about? That’s just physical display. The intrinsic is the bigger discussion. How do we need to think about same-sex relationships … what rights are at stake and whose? Harking back to the ancient attitude on marriage, did the tribe not just get another laborer?