Till We Meet Again – Flat Out to Keep

Many believe that demolishing Rochor Centre for a highway is for a greater good. Who’s to say and who is going to have the last say? Will the drivers that fly through town, saving 15 minutes of travel time, think about the love of Rochor Centre residents for their neighborhood?

The public has accepted the fact that Rochor Centre is gone, but it will still live when the pounding finishes … will it not?

NOTE: No part of ANY text and material related to Till We Meet Again – Flat Out to Keep can be used, copied, published or quoted without written permission from the author(s).

The Song of Silence for Rochor Centre

Noises from many were made when the decision to demolish Rochor Centre was announced in November 2011, and we know that many voices went unheard when the community of Rochor Centre completed their relocation by February 2018.

The play has ended and the stage is now permanently closed, after 40 years of bringing joy and tears to the audiences.

A limitation on my sense of sight was imposed to me as I photographed the four buildings with no access beyond the security guard post. But the good thing was, my senses of auditory and emotion were still heightened by the pounding of machineries onto the concrete of Rochor Centre – like hearing the scream and feeling the pain.

In the second of this three-part residency Till We Meet Again with Exactly Foundation on the redevelopment of Rochor Centre, Flat Out to Keep is my singing for Rochor Centre … in its darkest time.

And hor… we are so often presented with the idea that the flattening out of Rochor Centre is to keep up with the Singapore’s economic growth and progress by building a new expressway (North-South Expressway) linking Admiralty to East Coast Parkway via Thomson Road and Bukit Timah Road. And all this despite Singapore building many MRT Stations around the island and encouraging Singaporeans to go car-lite.

So, who are the ones benefitting from all this, ah?

NOTE: No part of ANY text and material related to Till We Meet Again – Flat Out to Keep can be used, copied, published or quoted without written permission from the author(s).

Flat Out to Keep is the second of a three-part Exactly residency Till We Meet Again by Lau Eng Seng on the demolition of Rochor Centre to build part of the new North-South Corridor in early 2020s. We hear that it will be an underground thruway which saves 15 minutes driving time from East Coast Parkway to the north of Singapore. On the way to Malaysia, great for those going to/from Malaysia.

I wrote about surviving move-outs in Eng Seng’s first Exactly project, What to Keep? (December 2016), which visualized the moving out of Rochor Centre residents as a metaphor on saving heritage cityscapes. Many of us have moved home/office and often have to decide what to take with us and what to chuck. Is that like our “keep or demolish” of our cityscape heritage? What else do we end up throwing out, even inadvertently? For example, gone are the everyday goings-on of the residents affected, human and animal … and trees, plants. Isn’t the “everyday” what makes a community? Is that what changed irretrievably when Rochor Centre is demolished, is that what is being thrown away?

Eng Seng continues to be that flâneur described by Susan Sontag in her 1977 essays, On Photography. She described how, since the early 20th century advent of hand-held cameras, the camera has become the tool of the flâneur:

The photographer is an armed version of the solitary walker – reconnoitering, stalking, cruising the urban inferno, the voyeuristic stroller who discovers the city as a landscape of voluptuous extremes. Adept of the joys of watching, the connoisseur of empathy, the flâneur finds the world “picturesque.”

That voluptuous extremes of Rochor Centre are now gone. One of Eng Seng’s iconic photographs from What to Keep? is this white-out space, manually outlining Rochor Centre. Now, Flat Out to Keep shows the demolished real, a gap by day and even more pronounced by night. I recall someone referring to heritage loss like an extracted tooth: it’s gone but your tongue still feels around and knows that the tooth was once there. 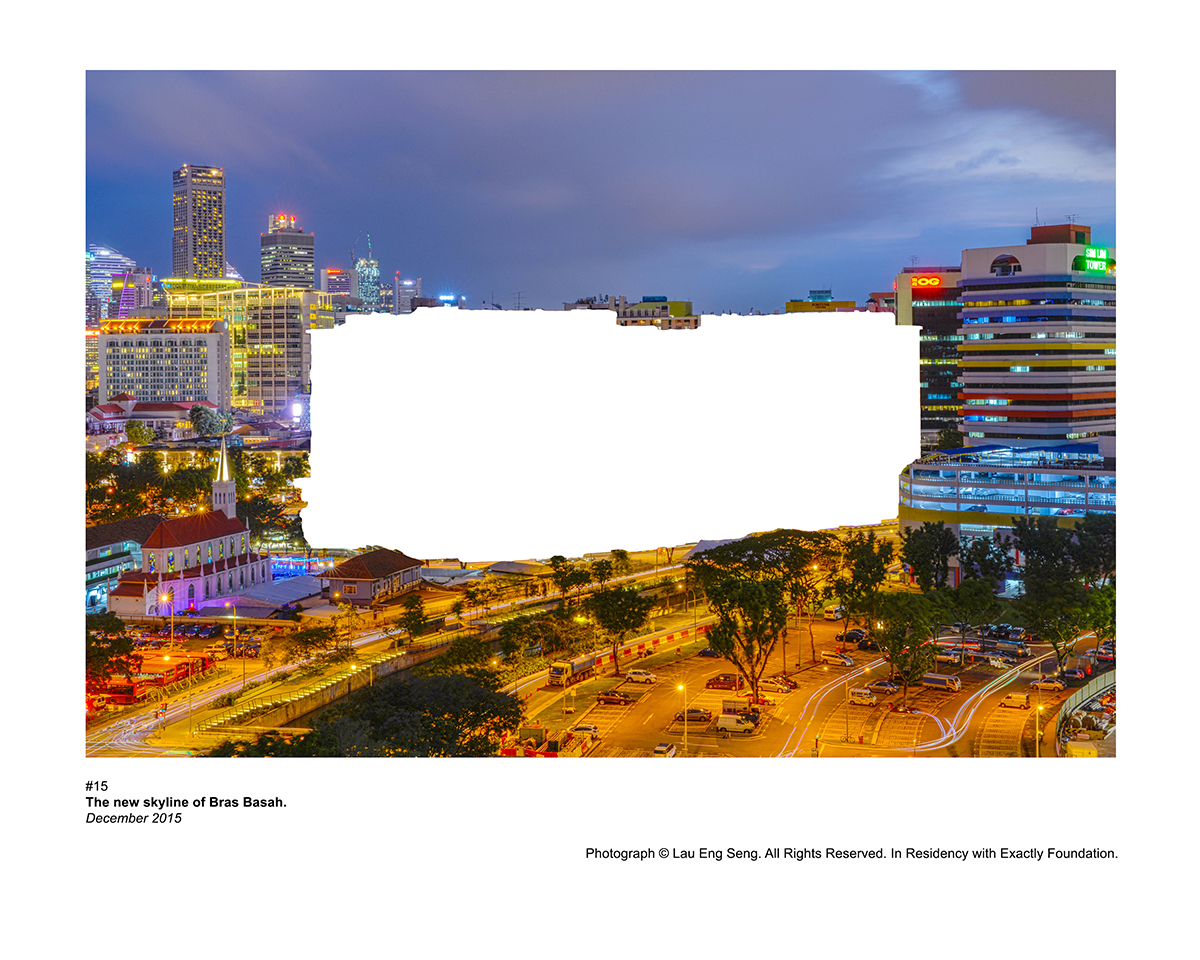 The picturesque, especially in documenting something that we so fear will be forgotten, turns out to be about the everyday and its predicaments. Is our vantage point as citizens just being flâneurs?

So now, we will get a new picturesque. Will the Rochor Centre gap be a green spot above the underground highway, landscaped with re-located trees and shrubbery, flagging to birds and insects to stop over? Would we the humans think it’s picturesque and a job well done? Just who is going to and from Malaysia every day? By the way, who’s driving?

[1] Wart is short for Stalwart, which Exactly Foundation’s first resident Kevin Lee suggested that for future residences, I should pen a statement as “Exactly Foundation Stalwart”. Thought “Stalwart” carried too much adult responsibility … ‘Wart will do.